Financial markets prefer Republican presidents, right?  Low taxes, reduced regulations and free markets are central to the Republican economic platform, and seemingly ideal to drive corporate earnings and stock prices higher.  Yet, in looking back at the performance of the S&P 500 (“the market”) the results paint a different picture.  Since 1926 the market has averaged nearly 15% a year when a Democrat sat in the Oval Office compared with a touch over 9% while a GOP was living in the White House.   Even after removing Herbert Hoover from the study (a Republican president during the Great Depression when the market fell over 80%) the market performed better under the Dems.

With the election only weeks away many investors have turned their attention to politics and may be wrongly concerned that the outcome could have an outsized impact on future returns.   Looking back, election years have been mostly friendly to the market – consider that since 1926 the average annual return for U.S. stocks has been 10.1%, compared with 11.3% during election years.  And, if history is a guide stocks have performed better when the sitting president is reelected. 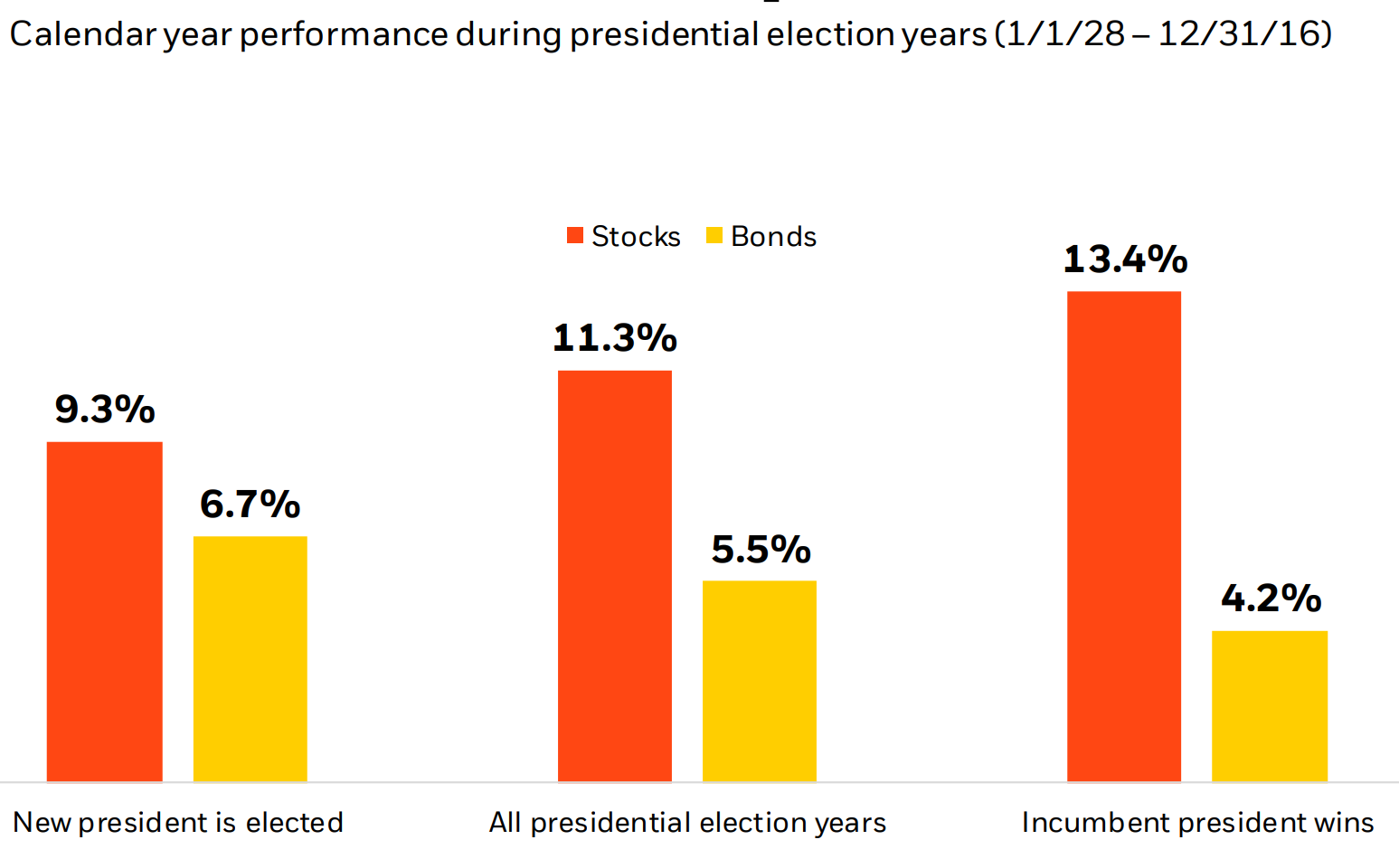 Under normal circumstances these historical figures might provide comfort, but not today.  Things seem different today, as they were around the 2016 election.  Back in 2016 the consensus was that the unpredictable and unconventional nature of a Trump presidency would devastate markets.  After all, the market dislikes uncertainty above all.  Those fears turned into reality on election night when after Trump was declared the winner Dow Jones futures plunged 900 points.  As markets fell overnight, former MIT and Princeton Professor, and Nobel Prize winner Paul Krugman penned an opinion for the New York Times declaring that the market would “never” recover and that Trump would drive the economy into a “global recession with no end in sight”.   Yet despite Dr. Krugman’s prediction the S&P 500 is up over 50% since that piece was written.  The economy was also on strong footing (unemployment was at a 50 year low in February) before being brought down by the pandemic.

Since the presidential debate, the odds of Biden victory have increased.  The Economist estimates that Joe Biden has a 90% chance of winning the electoral college and a 99% chance of taking the “popular vote”.  Of course, the polls also called for a Clinton victory four years ago.  Still, by many indications the market is starting to “price in” a Biden victory.

In addition to spending on infrastructure, part of Joe Biden’s economic plan calls for higher taxes for corporations, high earners, and an increased estate tax burden.   Increased corporate taxes would of course immediately impact corporate earnings, which – all things equal – could hurt stock prices.  Before the Trump tax cuts corporate taxes were 35% and now sit at 21%.  Mr. Biden is proposing to keep half of those cuts in place, bringing the corporate tax rate to 28%, which would still be lowest tax burden for corporations since 1940.

Mr. Biden is also proposing increasing the top personal income tax bracket to 39.6%, which is where it stood before the 2017 cuts, from 37%.  However, state and local tax deductions would not be limited to $10,000 as they are now, so many residents of highly taxed states like New York could see little, if any, increase in overall tax liability.  At 39.6% the top rate would equal that during the Clinton and Obama administrations, which rank as the best runs ever for stocks. 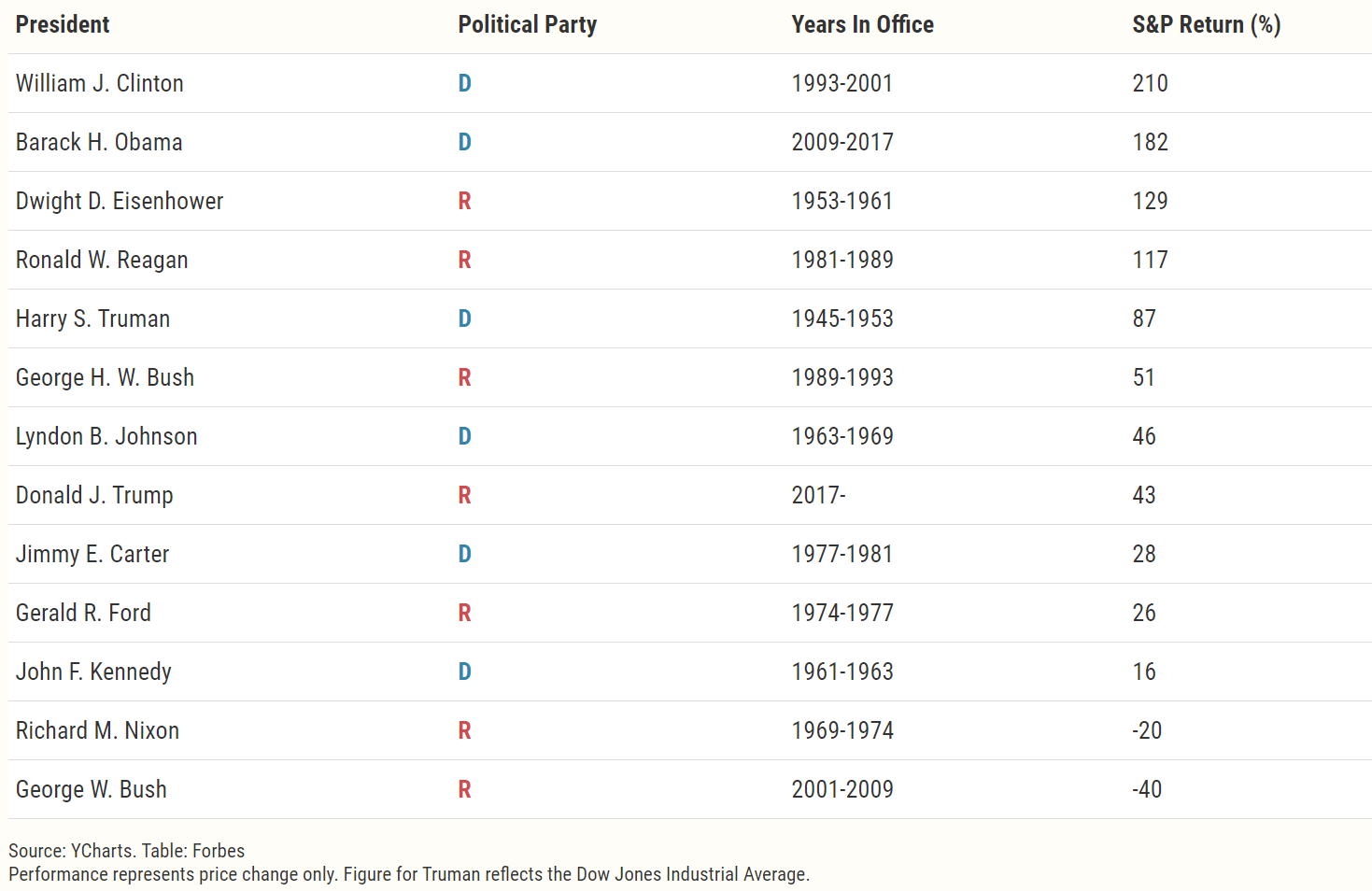 To be sure, for Mr. Biden’s plans to pass would likely require that Democrats control both the House and the Senate.  And should that become the case, many estate plans would likely have to be revisited as changes in that area could be significant.

Yes, Democrats have enjoyed stock market prosperity and election years are usually friendly to investors.  But even a novice statistician will quickly reply that correlation is not causation.   The most comprehensive and academically rigorous study (Campbell & Li, 2004) of how presidents affect stock markets concluded “that neither risk nor return is significantly different across the presidential cycle”.  Over long periods of time the notion that corporate earnings drive prices is well supported, but other factors come into play as well such as interest rates, innovation, demographics and host of other factors.

Low interest rates generally help the market and economy in several ways, and rates have never been lower than they are today.  Furthermore, according to statements by the Federal Reserve Board, rates are unlikely to rise before 2023.  When asked about the future direction of interest rates, Chairman Jerome Powell replied, “we’re not even thinking about thinking about raising rates”.  Low interest rates drive borrowing costs down for companies and individuals which is one reason why even financially healthy companies are borrowing at a record pace.  Mortgage rates still hover near all-time lows which have driven real estate prices, and U.S. household net worth, to all-time highs.  Low rates also keep the government’s cost of borrowing down, which is helpful given that public debt is at record levels.  Finally, low interest rates make stocks more attractive when compared with bonds.  Of course, record low rates also present challenges to bond holders and those searching for income without the volatility of stocks.

It has often been said that the pandemic has accelerated trends that were already in place – remote working, online shopping and less reliance on fossil fuels to name a few.   At the same time, there have been some unexpected consequences, like a surge in new businesses being launched.   Though U.S. retail bankruptcies hit a record in the first half of 2020, new businesses are being launched at the highest rate since 2007 (see chart).  While the economy has only replaced about half of the jobs that were lost this year so far, a recovery with a lot of start-ups tends to be more jobs-rich than one without.   No other developed world country is experiencing the same rise in entrepreneurship as America is today. 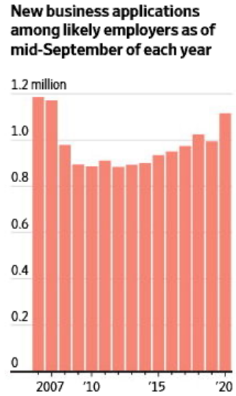 Studies show that most individual investors underperform the market over long periods of time due to their own behavior.  They tend to “buy high” and “sell low” and let their emotions, or political opinions, affect their investment strategy.  This has certainly been the case over the past few years when fund flows into stock funds are studied.  The follow graph illustrates that in 8 out of the past 10 years (which has a been great 10 year run for the market) many investors were exiting stocks.  Perhaps they were concerned about Trump’s impact on the economy (since 2016 there have been net outflows every year) or maybe it was Obama who led them to park their savings in cash.  Either way, they missed out.  Retail investors have such a poor track record of timing the market that strategies have been developed to simply take the opposite approach, as such many contend that the outflows are a positive sign for the market. 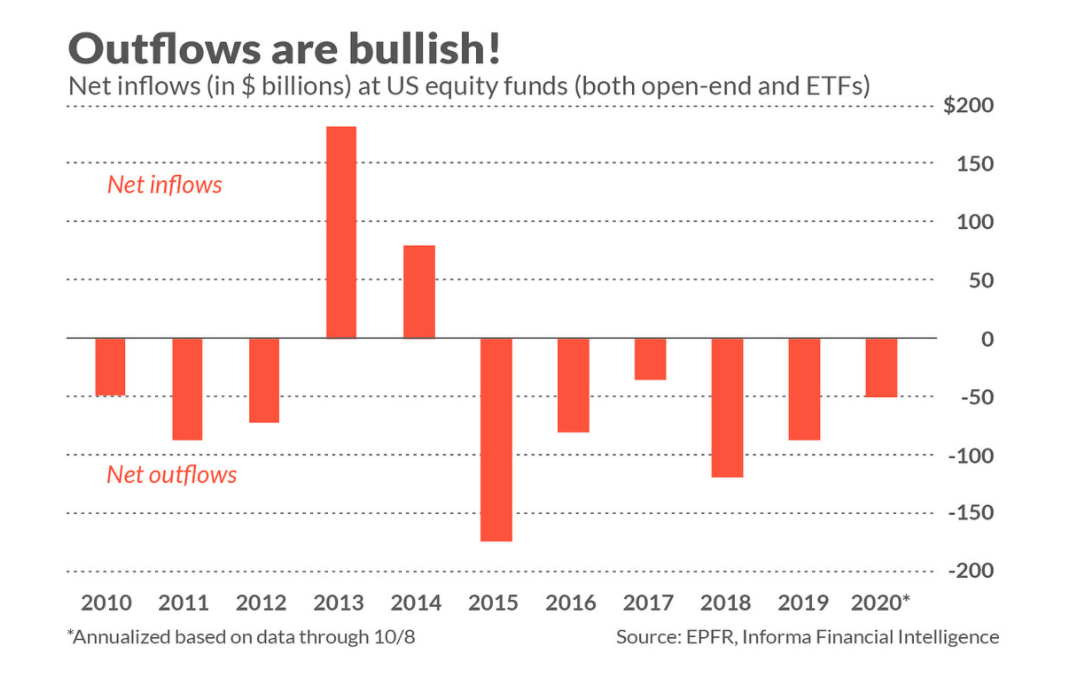 To the delight of many, the NFL was able to begin the football season on time, though the Super Bowl is still four months away.  If the “big game” is not played in early 2021 one wonders how those that follow the Super Bowl Indicator will adjust their investment strategy.  The Super Bowl Indicator has predicated the market’s direction with a success rate of near 75% over the past 50+ years.  Its premise is that if a team from the old NFC, or one with NFC roots wins the title, the market will be up that year.  But, what if the game isn’t played due to the virus?   Would that have the same effect on the market as not knowing the outcome of the election on the evening of November 3?  Or, does the outcome of a football game mean as much to the market as the outcome of a presidential election?  Correlation is not causation.