First, the bad news. During this year’s first quarter inflation reached a 40-year high.  Russia invaded Ukraine, destroying cities and killing civilians.  The bond market had its worst three month stretch since 1980.  At one point, the NASDAQ entered bear market territory, while the S&P 500 and Dow both experienced corrections.  And, by one common measure, recession is a near certainty.

Now for the good news.  While down for the year, stocks are up since the war began.  Unemployment rates are near 50-year lows.  The economy is outpacing its pre-pandemic growth trend.   Household net worth and corporate earnings are at all-time highs, and the same measure that tells us that a recession is on the horizon, also points to further gains for stocks.

It’s hard to recall a time when markets and the economy have been sending such mixed signals.  To understand these contradictory forces, it’s instructive to revisit March 2020 - the beginning of the pandemic.  In order to steer our country from a deep and prolonged recession, the Federal Reserve Board (The Fed) led by Chairman Jerome Powell, took unprecedented actions to keep the economy afloat.  These measures involved reducing a key interest to zero and increasing the money supply by printing trillions of new dollars.  Thanks to stimulus checks, loans to large corporations and small businesses, grants to municipalities and extended unemployment benefits there are nearly 40% more dollars floating around today than there were just two years ago.  These efforts helped our country avoid what could have been the worst recession since The Great Depression.

Monetary policy has always been known as a blunt tool, and while disaster was averted, today we are seeing at least one of its side effects in the form of inflation.  Over the past year, prices (as measured by the Consumer Price Index “CPI”) have increased 7.9%, a level not seen since the early 1980’s.  In hindsight, perhaps stimulus efforts were too plentiful and maybe interest rates should have been increased sooner.  Plenty of fingers have been pointed at The Fed, which is no longer using the term “transitionary” when it comes to describing inflation.  To be fair, supply chain disruptions and rising energy prices triggered by Russia’s unprovoked invasion on Ukraine have also added fuel to the inflationary fire.

Aside from putting pressure on consumers, persistent, elevated inflation can be harmful to financial instruments, especially bonds.   At their core, both stocks and bonds offer their holders the hope of receiving some form of payment in the future.   For stocks whose earnings are likely further out in the future (especially “growth stocks”) inflation makes those earnings worth less than before.  This explains why stocks in this category were down near 10% in the first quarter.   While stock earnings are not guaranteed, they can come in higher than expected and potentially rise with inflation.   Bonds, on the other hand, pay a guaranteed interest rate, so those future payments are certain to be worth less, in today’s dollars, should inflation remain high.  This partly explains why bonds (Bloomberg U.S. Aggregate Bond Index) were down 6% on average in the first three months of 2022, their worst showing since 1980.

To combat inflation the Fed has begun what is likely a series of interest rates hikes, lifting their key benchmark rate up .25% (from 0 to .25%) in March.  Chairman Powell indicated that additional hikes are likely at the remaining 6 Fed meetings in 2022.  Interestingly, only one year ago the Fed anticipated that there would be no increases to interest rates until 2023, which tells us that even the world’s top economists have cloudy crystal balls.

Like inflation, rising interest rates can put pressure on financial markets, especially bonds.  But this relationship can be nuanced.  For instance, in looking at the past 7 periods of rising rates, we see that on average bonds returned 3.85%.  Remember, even when values are declining bonds continue to pay interest and are less than 20% as volatile as stocks.  And, bonds often provide downside protection during stock market corrections. 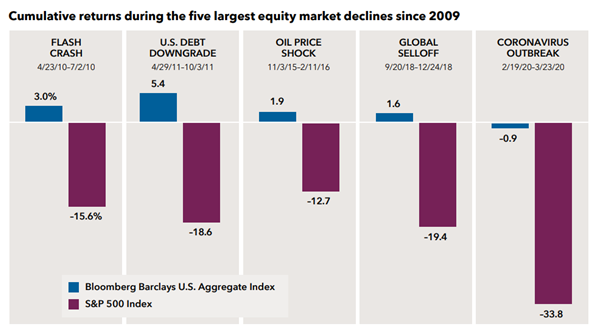 A study of stock performance (as measured by the S&P 500) during times of rising rates dating back to 1983 shows stocks gains of 5.8% on average during periods when The Fed was “tightening”.  In Fed speak, tightening refers to increasing rates and reducing the money supply.

“This Recession Indicator Is Flashing Warning Signs as Fed, War and Oil Threaten Economic Recovery” – Forbes, April 1, 2022.  This article, and many others calling a recession a near certainty have been plentiful since late March.  All cite an inverted yield curve as the sure sign that an economic slowdown will follow.  An inverted yield curve occurs when short term interest rates become higher than long term rates.  Under normal circumstances, the longer a person is willing to lend, the more he/she wants to get paid.  Therefore a 10-year bond usually has a higher yield than one that matures in only 2 years.   Should the yield of a 2-year bond exceed that of a 10 year, it signals a belief that the economy will contract and that the Fed will eventually have to lower interest rates.   Over the past 40 years, the yield curve (difference between the 2- and 10-year bonds) has been inverted just 7% of the time and has preceded every recession since 1955 with just one false alarm.

Of course, predicting recessions involves a lot of correlation and not a lot of causation.  Look no further back then 2019, the last time the yield curve inverted, for evidence of correlation not causation.  You may not recall that the yield curve inverted in 2019 but you most certainly remember the recession in Spring 2020, and what caused it.  So, yes, the 2020 recession was preceded by an inverted curve in 2019, but it was caused by COVID-19.

Historically, the difference between 3 month (not 2 year) and 10-year interest rates has better predictive power when it comes to spotting recessions, and as the following graph shows, it's still a steep climb.   Either way, an inverted curve has not necessarily been a bad thing for the stock market.  Since 1977 the S&P 500 has risen 11.8% on average a year after an inversion, falling on just one occasion in 2000. 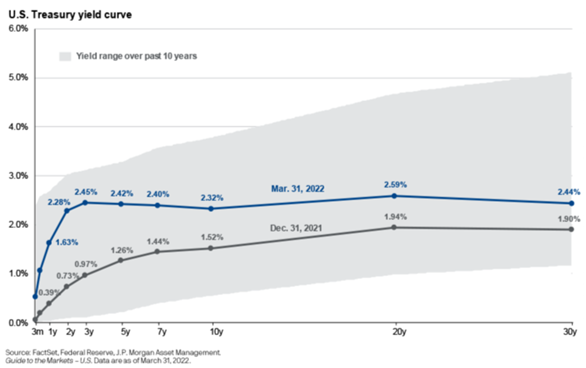 While whispers of recession can be heard in some corners, in many regards the U.S. economy is exhibiting signs of strength not seen in years, beginning with the job market.  The unemployment rate, at 3.6%, is approaching its 50-year low (3.5%) set back in February 2020.  Layoffs are at 20+ year lows, and there are more job openings (11+ million) than there are willing unemployed workers.  Given that our economy is nearly 70% driven by consumer spending, a strong job market is the foundation of robust nation.  Consumer balance sheets are strong as household net worth hovers near all-time highs.

As they have in the past, since the onset of the pandemic, both financial markets and our economy have demonstrated just how adaptable they are.  Capitalism is never stagnant and is always evolving.  Creative destruction is an ongoing process that sees new innovations render existing ones obsolete over time, often increasing efficiency.  Consumers have become more efficient (people used to stand in line for hours in front of record stores waiting to buy music) and so too have workers.  Gone are the days where a day or two of work time is lost to travel for a meeting that can be done over video conferencing.  These factors have contributed to economic growth (as measure by GDP) that is set to exceed its pre-COVID trend sometime this year.  Simply put, while we would certainly not trade the lives lost from it, our economy is in a better place than it would have been had COVID never arrived on our shores. Perhaps creative destruction will transform global energy markets as a result of the war.

By using mutual funds and exchange traded funds (ETFs), and through periodic rebalancing, our portfolios are constantly changing to navigate both the current economic threats and opportunities – including inflation.  A good financial plan is never constructed with the assumption that markets only rise.   After many years of cooperative conditions for financial markets (Spring 2020 aside), 2022 offers its fair share of challenges.  But standing on the sidelines could never be more costly.  With inflation running near 8%, and bank/money market rates still near zero, one is certain to lose wealth, in real terms, by being a bystander.  As investors, we should all understand the conditions of the road we agreed to travel down to meet our long-term goals.   Fidelity sums those up nicely below.   The next time things get a bit bumpy, just look back to this map. 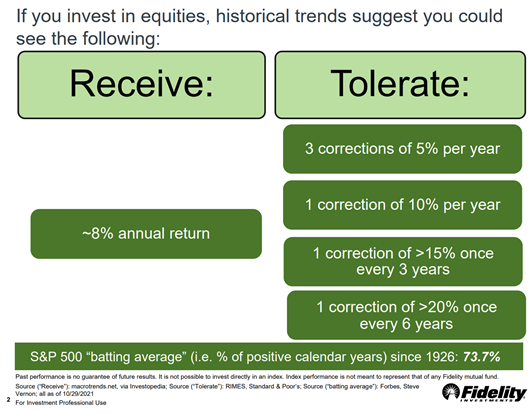 Registered Representative and Financial Advisor of Park Avenue Securities LLC (PAS). Securities products and advisory services offered through PAS, member FINRA, SIPC. Financial Representative of The Guardian Life Insurance Company of America® (Guardian), New York, NY. PAS is a wholly owned subsidiary of Guardian. National Financial Network is not an affiliate or subsidiary of PAS or Guardian. CA Insurance License Number - 0D23495. Data and rates used were indicative of market conditions as of the date shown. Opinions, estimates, forecasts and statements of financial market trends are based on current market conditions and are subject to change without notice. References to specific securities, asset classes and financial markets are for illustrative purposes only and do not constitute a solicitation, offer, or recommendation to purchase or sell a security. Past performance is not a guarantee of future results. S&P 500 Index is a market index generally considered representative of the stock market as a whole. The index focuses on the large-cap segment of the U.S. equities market. Indices are unmanaged, and one cannot invest directly in an index. Past performance is not a guarantee of future results.