Like a worried parent, the financial media is never short on thinking about what can go wrong.  Perhaps the anxiety is genuine, or maybe the angst is manufactured because fear inducing headlines get more views. Either way, the headlines often create investor unease, which in turn can affect investor behavior.  For the past few months inflation, fear of rising interest rates and tax hikes have been the primary concerns, yet despite some doomsday headlines, major stock indexes hover near all-time highs.

Anyone who is looking to buy a new car or house can attest that inflation fears are not unfounded.  Fueled by low interest rates and a desire for more space, median sales prices for homes exceeded $350,000 for the first time and are growing at a pace not seen in 30 years.  Global chip shortages, rising oil prices and supply bottlenecks have driven consumer prices up 5% in May, the highest rate in 10 years.

Some argue that inflation hurts both stock and bond prices.  Of course, the relationship between rising inflation and asset prices is complex, with multiple factors playing a role.  Put most simply, an investment in stock or bond is one that is made with the expectation to receive cash flow in the future.  With a stock it could be earnings or dividends, and with a bond a coupon payment and the return of principal.  If the value of those future payments erodes because of inflationary pressures, the value of the asset (stock or bond) should fall today – in theory.

The rate of inflation plays an important role in this relationship.  Hyperinflation (which informally is defined as a 50% monthly inflation rate) decimates economies and governments; that connection is simple.  Lower, controlled inflation has generally been good for an economy.   Inflation has been historically low in the U.S. for the past twenty years, averaging just above 2% a year, compared with the 50-year average of 3.9%.  It was only two years ago that Federal Reserve Chairman Jerome Powell referred to weak inflation as “one of the major challenges of our time”.

That we are seeing higher inflation numbers today is not a surprise to many, including Chairman Powell who is predicting that inflationary pressures will be temporary.  The economy has restarted from a standstill, so pent-up demand was to be expected.  And many statistical measurements are distorted because since prices fell so dramatically in Spring 2020 the year-over-year comparisons are magnified.  Recognizing these factors, The Fed has communicated that they will allow inflation to run above 2% temporarily.  Either way, as the following chart illustrates, asset prices have fared well when inflation has risen from low levels which describes today’s environment. 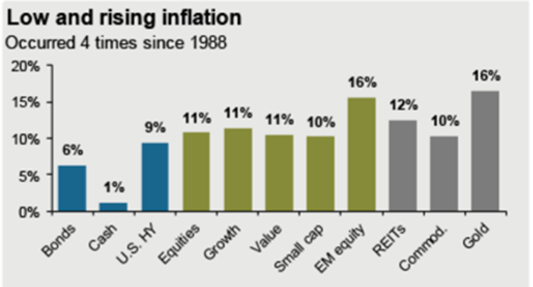 In response to the economic shock of the pandemic, the Fed lowered interest rates to near zero last Spring and began a bond buying program that injects $120 billion into circulation every month.  These efforts helped to lift the economy and financial markets over the past year.  By driving interest rates down, companies can borrow cheaply, and stock prices are boosted because they are few other attractive alternatives for investment dollars.   Now that the depths of the pandemic are seemingly behind us, rates will eventually have to be raised.  However, before the Fed increases rates, they will likely first slow down the monthly bond buying (referred to as “tapering”) and before they taper, they must announce that they will be tapering so as to not surprise the market.  In short, we very likely have several months, if not longer, before the Fed starts to raise rates.

In theory, and often in practice, rising rates hurt bond prices.  But, like the relationship between inflation and stock prices, the connection between rising interest rates and bond prices is nuanced.  In fact, in looking at the five sharpest yield spikes over the past 30 years, we see that bond investors who held their positions for at least two years were rewarded with competitive returns. 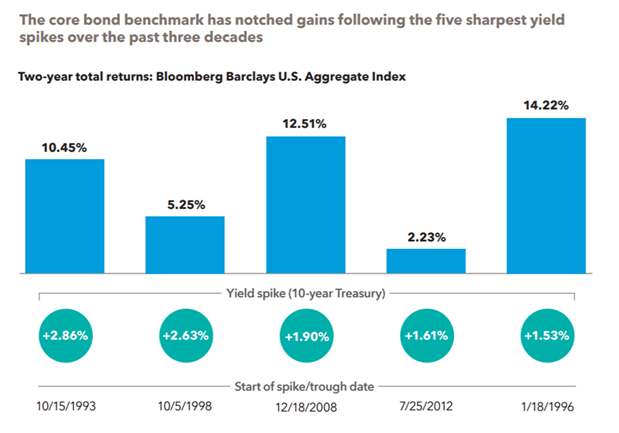 If inflation and rising interest rates are not keeping investors up at night, future tax increases just might be.  President Biden campaigned on an ambitious plan, including increasing capital gains taxes for those earning $1 million or more.  The plan calls for capital gains to be taxed as income whereas today those gains are taxed at a more favorable capital gains rate.  This increase, coupled with a proposed increase to the income tax rate for those earning over $400,000 would result in capital gains being taxed at 43.4% compared with 23.8% today.  This does not include state taxes, which when accounted for could drive the figure to over 50%.  Other increases to corporate taxes and estate taxes are also a part of the proposal.

While some progress has been made advancing an infrastructure bill, for the time being President Biden’s tax proposal seems unlikely to pass in its entirety as many Senators fear that tax hikes could stall the economic recovery.  In looking back at the impact of past capital gains tax increases on the market, it seems as though fear of the increase was worse than the increase itself.  As the following chart shows, while the market went down modestly before prior tax hikes, those losses were erased, and investors were ahead 6 months later. 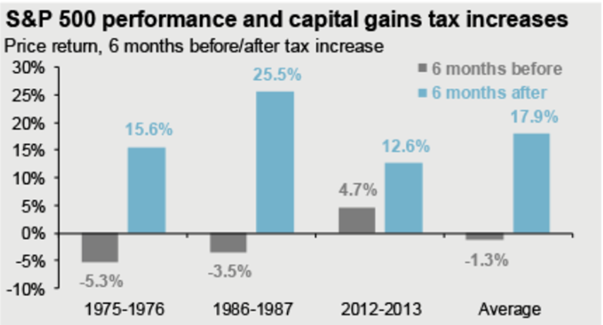 Surprises hurt financial markets far more than moderate inflation, rising interest rates and tax increases.  If the market expects inflation, it reacts in advance of inflation’s presence.  The same goes for tax increases and rising rates.  In early 2020 the market did not expect a global pandemic, which explains the 34% drop in the S&P 500 last Spring.  Same goes for 2008.  Most did not anticipate the extent of the financial crisis.  That surprised the market so much it fell over 50%.

Surprises happen often, however most are not as extreme.   Since 1980, the S&P 500 has been down 14.3% on average in any given year.  Those losses were often triggered by the introduction of an unknown, yet annual returns over that time frame were positive 75% of the time.  So, unless one can anticipate surprises, outwitting the market is near impossible.  How one behaves during surprises plays a critical role in creating optimal outcomes.

Over the 20 years that ended on December 31, 2020, the S&P 500 averaged 7.47% a year.  This time frame including three major bear markets, including the bursting of the tech bubble, the financial crisis of 2008 which resulted in the Great Recession, and a global pandemic, not to mention many other smaller shocks.  A  investment made at the beginning of that time would have more than quadrupled. However, if that investor missed the 10 best days during that 20-year period, his/her rate of return would have been more than cut in half, and if she/she missed only 20 days over that same time frame (an average of 1 day a year) they would have barely broke even.  Of course, those best days are often immediately following the worst days so investors must be steadfast during those times. 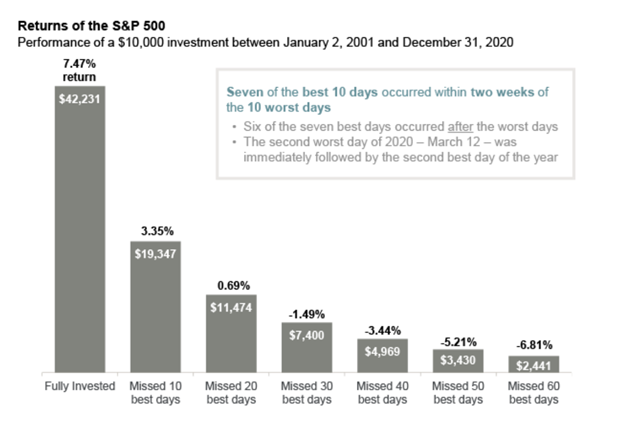 In seeking to produce the best outcomes for our clients, our portfolio management strategies incorporate our observations of today’s market and economic conditions, investment analysis, tax planning, rebalancing and variety of other inputs.  However, at the core and most critical to these outcomes is the “TIME IN the market” versus “TIMING the market” tenet.  Though the phrase anticipating surprises might be an oxymoron we felt it would be fitting since oftentimes people forget remembering about this simple yet effective principle.