Just like last time, this time is different.   Market movements that usually take a year to make, happen in a week, or even a day.  While a new bear market (a decline of 20% or more) was long overdue, the speed in which it occurred was unprecedented, as was the reason.  Volatility, though coming down from its March highs, has been historic.  Consider, in March the Dow Jones Industrial Average (“the Dow”) had its five worst single day point drops ever, and its four best.  With such intense swings, increased media coverage and likely more time to pay attention to the market, thinking about “the long-term” is nearly impossible.

While it’s anyone’s guess as to where the market will be in the next week, or even year (expert forecasters have never had such varied projections) we do know from history that the market goes up far more often than it goes down, and that the economy expands far more than it contracts, as the following chart illustrates. 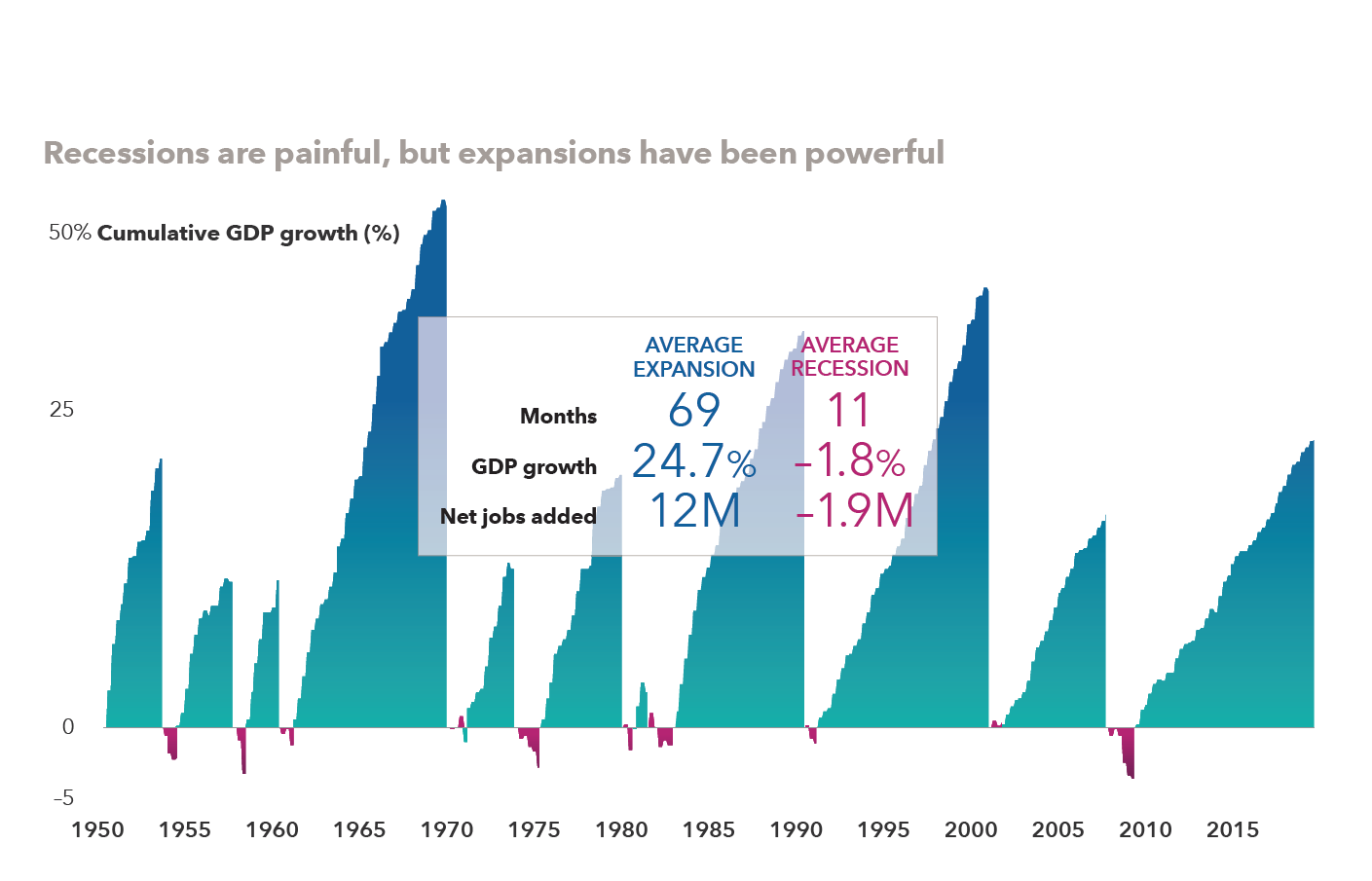 But, why does the economy grow more than it contracts?   While that question could spark an interesting debate – especially today as the government has introduced extraordinary levels of support to the economy – most would agree that an increasingly productive workforce, innovation and access to capital markets all play major roles.   Though government intervention was necessary to stabilize markets, forces of capitalism will drive the next wave of growth as they have in the past.

Today’s market conditions are often compared to those of 2008, yet the dynamics surrounding the financial crisis were far different than what we face today.  During the 2008 crisis the S&P 500 fell by as much as 57% (at its low point a few weeks ago the S&P 500 was down 34%), banks were part of the cause of the recession, whereas today they are part of the solution, and the Federal Reserve was hesitant in its response and was essentially was “writing the playbook” during the 2008 crisis, while today the Fed swiftly grabbed the playbook off the shelf and fired a giant financial bazooka to stabilize markets.  Though different, looking back to all that has happened since 2008 is instructive in demonstrating the economic adaption of our country and the forces of our capital markets.  Consider the following…

Of course many companies, like Blockbuster, did not evolve, though we likely spend more money on streaming services then we ever did on VHS rentals.  While the mention of these companies’ names was not done to recommend that our clients buy their stocks, each offer an example of how our economy has changed and grown over time.  Examples can be drawn from any decade – the camera was once cutting-edge technology as was the Xerox machine and transistor radio.  By reducing exposure to individual stocks and favoring mutual funds and ETF’s instead which invest in hundreds, if not thousands, of stocks, one is investing more so on the success of the economy and the market as a whole than an individual company that might not survive the changes that lie ahead.

Looking back at what our economy has accomplished since 2008 is amazing.  In February unemployment was at a 50-year low (coming down from 10% in 2009) and household net worth was at an all time high.  We can’t know when the next expansion will begin, but chances are there are a few future Mark Zuckerberg’s attending online college classes today and the ideas they launch will bring about the next wave of innovation and productivity and will give birth to another round of future household names that will be the top holdings in your mutual funds in 2030.

We hope that everyone is safe and healthy.

The Registered Representative is securities licensed in AR, AZ, CA, CO, CT, DC, DE, FL, GA, IL, IN, KS, LA, MA, MD, ME, MN, MT, NC, ND, NH, NJ, NV, NY, OH, PA, RI, SC, SD, TN, VA, VT, WA and WI and advisory licensed in CT, FL, IL, MA, NJ, NY and SC and the material is strictly intended for individuals residing in those states. No offers may be made or accepted from any resident outside these specified states.