Recession and Impeachment. Today’s financial headlines seem to be fixated on both topics, yet if history is any guide, only one of the two is likely to have an influence on financial markets.

Recessions are periods of economic decline which are identified when Gross Domestic Product (GDP) falls for two consecutive quarters. Since GDP is reported one month after the end of a quarter, it is likely that we will not know if we are in a mild recession until it’s already over. Predicting when recessions will occur is near impossible even for the world’s best economists. Consider: since 1988 there have been 469 recessions worldwide, though only 4 were predicted by the IMF (International Money Fund) in the Spring of the preceding year - yet, like a commuter packing an umbrella at the weatherman’s urging, it seems as though on any given day investors are convinced a recession is forthcoming, even though GDP has averaged approximately 2.5% in 2019 so far.

Fears of recession have been sparked by the temporary presence of the so-called inverted yield curve and the ongoing trade dispute with China. While the yield curve situation has mostly normalized, trade tensions have weakened the manufacturing sector. Economic indicators aside, some fear a recession simply because it’s been so long since we have had one. Yet we must keep in mind that that recessions are a normal part of the economic cycle. Since 1928 there have been 14 recessions, or approximately one every 6 ½ years. However, in the past 25 years we have experienced only two - the last one over 10 years ago - so, it’s not surprising that most people no longer view them as a normal occurrence. Making matters worse is that most investors are inclined to associate the last recession as typical, which of course was not the case – it was the worst since the Great Depression.

Though bear markets (declines of 20% or more) often are accompanied by recessions, typically a recession must be paired with a spike in commodity prices, rapidly increasing interest rates or overvalued stocks in order to ignite a bear market. That doesn’t appear to be the case today. Commodity prices have been flat for 10 years, few predict that the Fed is about to aggressively start increasing interest rates (they lowered rates twice this year with further cuts expected), and stock valuations are at historical norms.

Today’s economy is sending such mixed signals that even the Federal Reserve’s team of experts seem to disagree on the future direction of the U.S. economy. Though most members of the committee voted to reduce rates in late September to keep the economy growing, some felt that the economy does not need the boost right now. After all, the unemployment rate is at a 50-year low.

If Ivy League educated economists have trouble forecasting recessions, it’s a wonder why anyone else would bother trying, especially since they represent such a small fraction of time. Since 1950 the average recession lasted just 11 months during which time the S&P 500 was surprisingly up 3% on average. Expansions lasted six times as long, accompanied by a 117% return in the S&P 500. Armed with such knowledge one should rest easy that calling the next recession is not only a futile effort, it is likely to be a costly one as well. 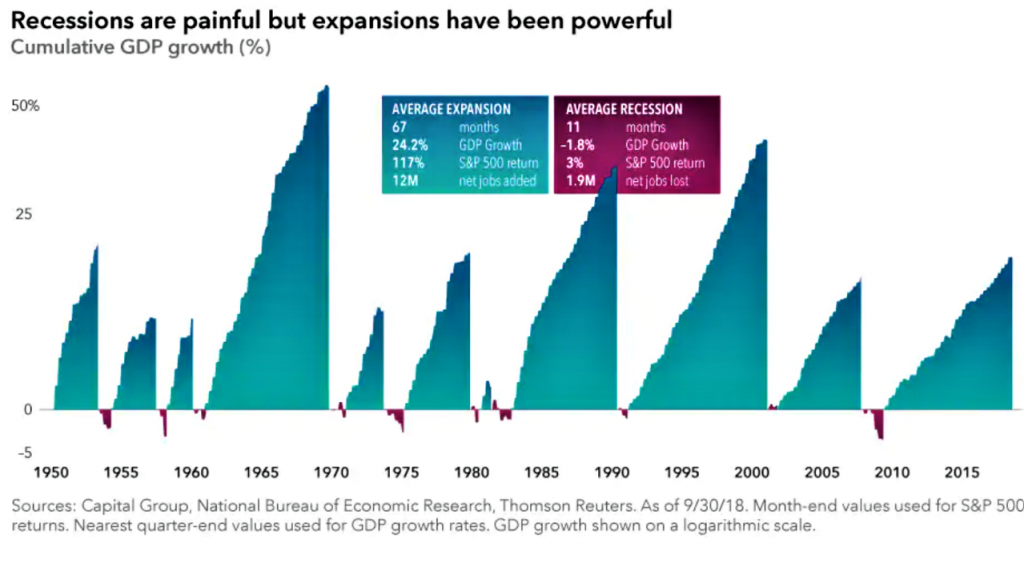 On September 24, House Speaker Nancy Pelosi initiated impeachment proceedings against President Trump. Financial markets mostly yawned at the news, perhaps because the belief is that a conviction will never happen in a Republican controlled Senate or because there is overwhelming evidence that whoever is sitting in the Oval Office has little, if any, impact on the long-term performance of the stock market.

Studying how the market behaved during past impeachments is fruitless given the small sample size. There have been two impeachments since the modern stock market began – Richard Nixon in 1974 and Bill Clinton in 1998. The market fell 33% after President Nixon’s resignation, and rallied 39% after the House impeached Bill Clinton. Of course, the economy was already headed into a vicious recession during the mid-70’s, whereas the dot.com boom of the mid to late 90’s was unfazed by the political drama. Though some credit the lift in stock prices since the election to President Trump’s corporate tax cuts and business friendly policies, others believe that the market would be relieved if Trump were to resign asserting that a President Pence might champion the same business friendly policies with less erratic behavior.

Impeachment aside, politics are likely to become intertwined into financial conversations increasingly more as the election approaches. Despite some quirky relationships between politics and the market’s performance, most serious researchers and students of the market understand that those who are in control in Washington have much less influence, if any at all, on financial markets than most people believe.

For instance, a common assumption is that Republicans, who generally stand for lower taxes, deregulation and free enterprise, are better for the market. But history says otherwise. Perhaps paradoxically, markets have performed better under Democratic presidents. Looking back to 1900, the Dow Jones Industrial Average has been up an average of nearly 9% when Democrats were in control, compared with approximately 6% during Republican administrations. Looking at more recent history, some might find it shocking to see that while the stock market nearly doubled over Ronald Reagan’s two terms, it performed nearly twice as well when Bill Clinton was in office. This is not to say the markets will perform better when a Democrat is in office, rather it demonstrates that other forces, beyond the control of law makers, are at force when determining stock prices.

So, the next time a pundit cries out that markets would crumble if Elizabeth Warren were in the Oval Office next year, remember that Nobel Prize Winning Economist Paul Krugman wrote on election night in 2016 as markets were in a free fall that “if the question is when markets will recover, a first pass answer is never”. At the time that article was written the Dow hovered around 18,000 – today it stands near 26,000. So, as political battles start to heat up, remember the bi-partisan axiom “it’s time in the market, not timing” that generates superior returns.

Written by Robert C. Votruba, Ph.D., Director of Investments, National Financial Network LLC. Registered Principal and Financial Advisor of Park Avenue Securities LLC (PAS), 990 Stewart Avenue, Suite 200. Garden City, NY 11530. Securities products and advisory services are offered through PAS, member FINRA, SIPC. Financial Representative of The Guardian Life Insurance Company of America (Guardian), New York, NY. PAS is an indirect, wholly owned subsidiary of Guardian. National Financial Network LLC is not an affiliate or subsidiary of PAS or Guardian.
Opinions expressed herein are not necessarily those of Guardian or Park Avenue Securities. Data and rates used were indicative of market conditions as of the date shown. Opinions, estimates, forecasts, and statements of financial market trends are based on current market conditions and are subject to change without notice. References to specific securities, asset classes and financial markets are for illustrative purposes only and do not constitute a solicitation, offer, or recommendation to purchase or sell a security.
Data Source: FactSet

S&P 500 Index is a market index generally considered representative of the stock market as a whole. The index focuses on the large-cap segment of the
U.S. equities market. Indices are unmanaged and one cannot invest directly in an index. Each company’s security affects the index in proportion to its market value. NASDAQ Composite Index is a market value-weighted index that measures all NASDAQ domestic and non-U.S. based common stocks listed on the NASDAQ stock market. Dow Jones Industrial Average is a widely-used indicator of the overall condition of the stock market, a price-weight- ed average of 30 actively traded blue chip stocks, primarily industrials, but also includes financial, leisure and other service oriented firms. Data and rates used were indicative of market conditions as of the date shown and compiled by briefing.com. Opinions, estimates, forecasts, and statements of financial market trends are based on current market conditions and are subject to change without notice. References to specific securities, asset classes and financial markets are for illustrative purposes only and do not constitute a solicitation, offer, or recommendation to purchase or sell a security. Past performance is not a guarantee of future results. Russell 2000 Index measures the performance of the smallest 2,000 companies in the Russell 3000 Index of the 3,000 largest U.S. companies in terms of market capitalization. MSCI Emerging Markets Index is a free float-adjusted market capitalization index that is designed to measure equity market performance of emerging markets. Chicago Board Options Exchange Volatility Index (VIX) tracks the expected volatility in the S&P 500 Index over the next 30 days. A higher number indicates greater volatility.

The S&P MidCap 400 provides investors with a benchmark for mid-sized companies. The index seeks to remain an accurate measure of mid-sized companies, reflecting the risk and return characteristics of the broader mid-cap universe on an on-going basis. The Wilshire 5000 Total Market Index represents the broadest index for the U.S. equity market, measuring the performance of all U.S. equity securities with readily available price data.

The Wilshire 5000 Total Market Index, or more simply the Wilshire 5000, is a market-capitalization-weighted index of the market value of all stocks actively traded in the United States.The S&P SmallCap 600® measures the small-cap segment of the U.S. equity market. The index is designed to track companies that meet specific inclusion criteria to ensure that they are liquid and financially viable. The Nasdaq 100 Index is composed of the 100 largest, most actively traded U.S companies listed on the Nasdaq stock exchange.