Which of the following are true?

Even if you know that the answer is “D” you might still be wondering why, and chances are you are not alone.  Business Insider labeled the current relationship between the economy and the stock market the “greatest dichotomy in the history of financial markets.”   Interest rates are at all-time lows, unemployment at all-time highs, small businesses are under pressure, yet the stock market doesn’t seem to care.

Though several factors have played a part in lifting markets from their mid-March depths, the Federal Reserve Board (“the Fed”) has done most of the work.  Taking a page from their playbook created during the 2008 financial crisis, Chairman Jay Powell and company have already injected trillions of dollars into the economy with more to come.  The Fed creates money digitally by buying bonds – mostly from the U.S. Government.   Or, as Chairman Powell explained it in recent interview with 60 Minutes…

“We print it digitally. So we-- you know, we-- as a central bank, we have the ability to create money digitally and we do that by buying Treasury Bills or bonds or other government guaranteed securities. And that actually increases the money supply. We also print actual currency and we distribute that through the Federal Reserve banks”.

So, by purchasing bonds, the Fed creates money.   Of course, this is not the first time the Fed has created money by buying bonds, as the following graph illustrates.  The image depicts the Fed’s balance sheet – the amount of bonds they own, which in turn represents the amount of money they created.  As you can see, the Fed created trillions after the 2008 crisis and applied a similar strategy to today’s circumstances with a multiplier effect for good measure.  Roughly speaking, over the past three months the Fed has pumped nearly the same amount of money into our economy as they did over nearly 6 years following the 2008 crisis.   The efforts following 2008 were thought to have created one of the greatest runs for stocks ever, the same run that ended in February with COVID-19.  Cleary their efforts have stabilized markets today, prompting President Trump to recently name Chairman Powell as the “most improved player” in the administration (last year he was “Clueless Jay”). 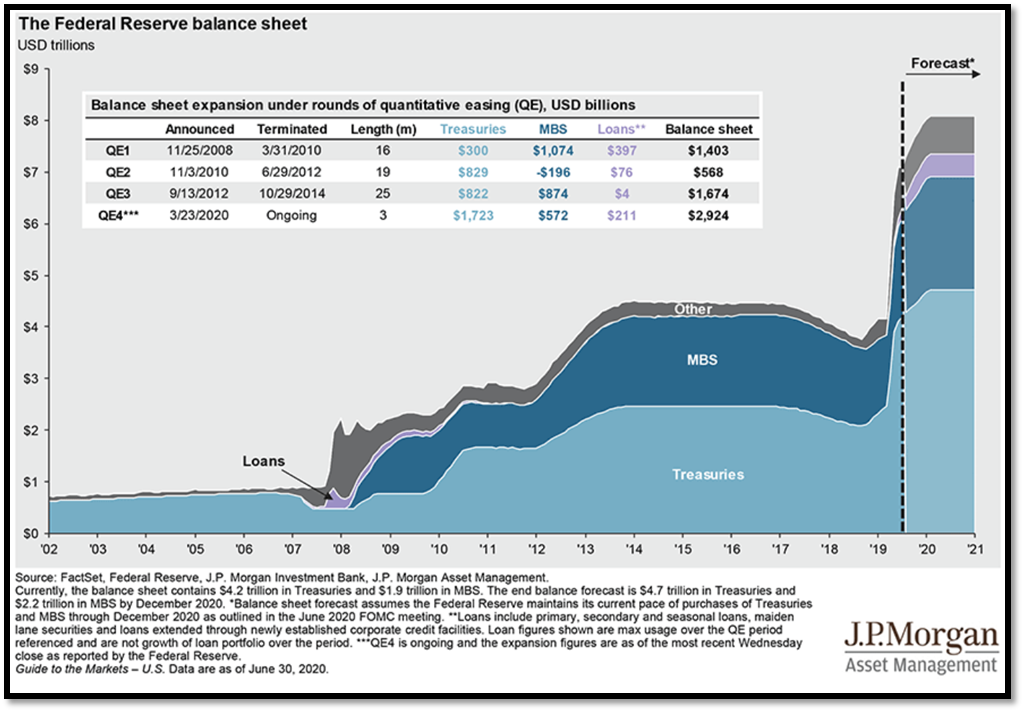 Open just about any economics textbook and you will find more than a few pages devoted to how creating too much money, that is chasing too few goods, usually results in inflation.  Thus, leading to the fear that The Fed’s efforts will ultimately lead us down an inflationary road.  While this theory has generally held true in its simplest form, it is of course nuanced.   For instance, if those newly printed dollars are not being spent and are saved, inflation should not occur.  Look no further back than 2008 when over six years the Fed dumped nearly $4 trillion into the economy yet U.S. inflation averaged just 1.8% from 2015-2019, causing Larry Summers (former Treasury Secretary and former President of Harvard University) to label inflation as “stubbornly low”.  Inflation has been running at under 3% since the early 90’s and usually falls during recessions (see chart). 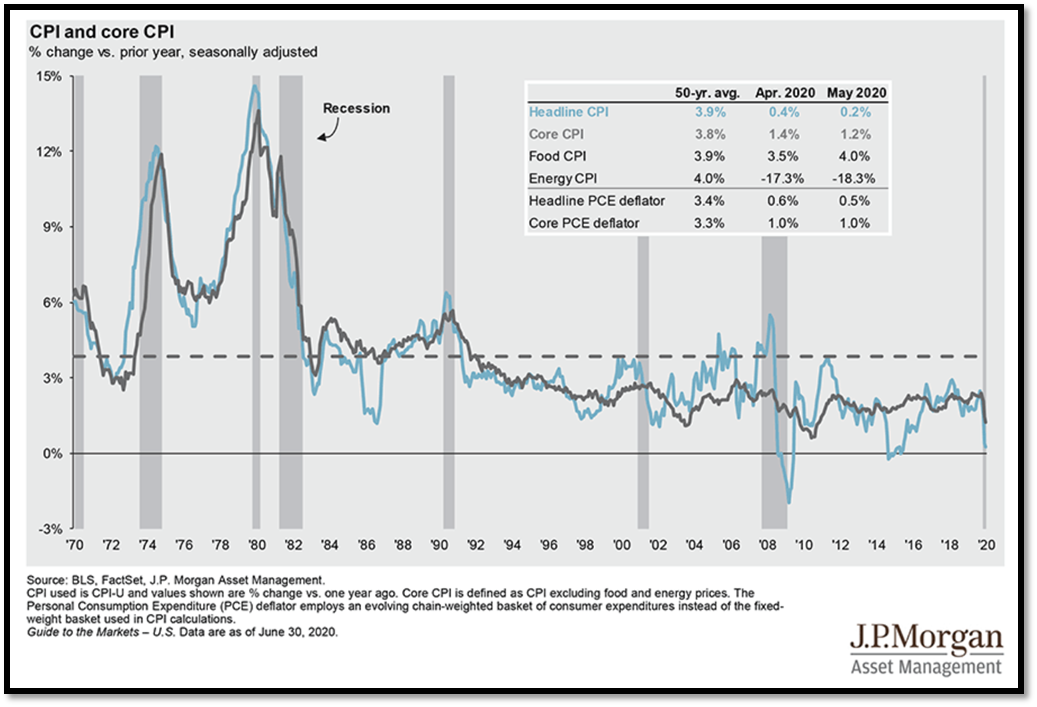 The last time inflation threatened the health of the economy was in the 70’s and early 80’s.  Though it is up for debate, most economists would agree that the “Great Inflation” of the 1970’s was caused by rising oil prices, full employment, and the final abandoning of the gold standard.  In order to combat inflation, the Fed increased their benchmark interest rate to 20% in 1979 and 1980.  Today, it is likely that interest rates will remain low for some time.  When asked about the future direction of interest rates in a recent testimony, Chairman Powell said of the Fed's intentions: “We’re not even thinking about thinking about raising rates.”

Another theory, which can be traced back to the early 20th century, asserts that a government can print money to pay its bills with few consequences – to a degree of course.  While controversial, MMT – Modern Monetary Theory, has been brought into the national economic conversion more over the past few months, as the monetary printing press has been working overtime.  Of course, we won’t truly know what the long-term effects of this historic stimulus will be, but for now worrying about inflation is like asking for the dessert menu before the appetizers have been ordered.

Though the Fed has done much of the heavy lifting in bringing markets back from their March depths, other forces have contributed to rally.  For starters, the stock market is rarely ever concerned about what is happening currently.   Rather, valuations are based on what people think will happen in the future, and today the market is telling us that with the progress being made with vaccines and treatments, things will improve next year and in 2022.  Furthermore, though companies like JCPenney have periled under the COVID shutdowns, others have emerged as new leaders.  In many ways the virus has accelerated trends that were already in place – more online shopping, reducing reliance on of fossil fuels and an increasingly remote lifestyle.

To be sure, the recent run up in the stock prices of America’s largest technology companies have distorted how markets are performing.   Amazon, Apple, Google, Microsoft and Facebook now account for approximately 20% of the S&P 500, helping the index rebound from its low.  At the same time, many other segments of the market (mainly the smaller companies and those categorized as “value” stocks) have not fared as well.

The stock market hates the unknown.  It always has and always will.  In order to value a stock, analysts use an estimate of a company’s future earnings.  Typically, companies provide those estimates, yet due to all the uncertainty with the virus over 40% of those in the S&P 500 have pulled their guidance completely. Such uncertainty is likely to cause continued volatility over the next few months.

If nothing else each crisis is another learning experience – yet the lesson is always the same.  This time, it reminded those who forgot that investors must be prepared to ride out declines in order achieve long term results.  Predicting when, why and how long those declines will last on a consistent basis is impossible.  It is also impossible to know when recoveries will occur and how quickly they will happen – just look at the last 4 months when the S&P has climbed 40%.  Though this market cycle is far from over, few thought the market would rebound so quickly.  As the great investor Peter Lynch said: “Far more money has been lost by preparing for corrections, or trying to anticipate corrections, than has been lost in corrections themselves.”

The Registered Representative is securities licensed in AR, AZ, CA, CO, CT, DC, DE, FL, GA, IL, IN, KS, LA, MA, MD, ME, MN, MT, NC, ND, NH, NJ, NV, NY, OH, PA, RI, SC, SD, TN, VA, VT, WA and WI and advisory licensed in CT, FL, IL, MA, NJ, NY and SC and the material is strictly intended for individuals residing in those states. No offers may be made or accepted from any resident outside these specified states.