It’s been a tough 12-month stretch for financial markets.   The S&P 500 (an index of the 500 largest companies in America) was down nearly 20% in 2022 - its worst year since 2008.  By many measures, bonds had their worst year ever, recording double-digit losses.  Bellwether stocks that carried the market for the past several years had it far worse.  On a combined basis, Apple, Microsoft, Alphabet (Google), Tesla, Meta (Facebook), Amazon, and Netflix were down nearly 50%.  Many popular “Covid stocks,” like Peloton and Zoom, are down over 90% from their peaks. Some investors in the riskiest corners of the market (like cryptocurrencies) were wiped out altogether.  Yes, 2022 was a rude awakening.  And while there was little place to hide, those who followed old lessons of diversification and risk management likely avoided life-altering losses.

Though many factors contributed to last year’s decline, a rapid rise in interest rates was at the top of the list.  To combat the highest inflation levels in 40 years, the Federal Reserve (“The Fed”), led by Chairman Jerome Powell, lifted rates seven times by a combined 4.25%.  Remember, interest rates were near zero 12 months ago and have been depressed for the better part of the last 14 years (see graph).  It is believed that the Fed’s efforts to combat the economic impact of COVID, which included lowering interest rates to zero, helped the U.S. economy to avoid a deep and prolonged recession.  But even those who slept through Economics 101 understand that zero percent interest rates – which translates to free money – are not normal.   Among many things, free money encourages risk-taking and spending.  This helps to explain why the riskiest assets were hurt the most last year and why inflation has been more persistent than most people, including Chairman Powell, expected.   Many pundits, having the benefit of 20/20 hindsight, blame the Fed for not lifting rates sooner.  To be fair, the Fed encountered an unprecedented economic shock in 2020 and certainly did a fine job putting out the fire. Still, as any firefighter knows, a few broken windows come with the territory if you want to save the house.

Large, rapid increases in interest rates not only hurt so-called growth stocks like Amazon and Tesla, they also harm traditionally safer assets like bonds.  Bonds that were issued before the Fed started lifting rates in 2022 had lower interest rates. Therefore, those bonds are worth less than those being issued today at much higher rates.  As a result, bonds did not provide their familiar shelter in 2022.  A common measure of overall bond prices was down 13% in 2022, its worst year ever.  In fact, before 2022, this same gauge of bond prices had negative returns in only four years since the mid-1970s:

Even rarer than the losses, bonds didn’t provide the safe haven they usually do during periods when stocks suffer.  Consider: 2022 was the only year dating back to 1977 when stocks and bonds declined in tandem.

While the Fed has seemingly made progress in its fight against inflation (the Consumer Price Index, the “CPI,” was as high as 9.1% in June and down to 7.1% in November) they are still far from reaching their goal of a CPI near 2%, which is why a few more rate increases are expected in early 2023.  Fears are that continued rate increases will drive the economy into a recession. However, Chairman Powell seems to believe that a mild recession might be necessary to cool inflation and that persistently high inflation presents a greater threat to long-term economic stability than a short-term economic slowdown.

Poking fun at economists’ tendency to issue far too many warnings, Nobel Prize laureate Paul Samuelson joked, “Economists have predicted nine of the last five recessions.”  Recessions are also tricky because they are only identified after they have started and sometimes not until they have ended.    Recently, there has also been a debate on how to identify a recession (some declared that our economy was in a recession in 2022).  By some accounts, markets have already priced in predictions of a mild recession in the next 12 – 18 months, meaning that should the economy enter a recession, there could be little, if any, effect on markets.  That’s because markets generally move ahead of the economy; they peak before a recession begins and start to rebound in or around the middle of a recession. 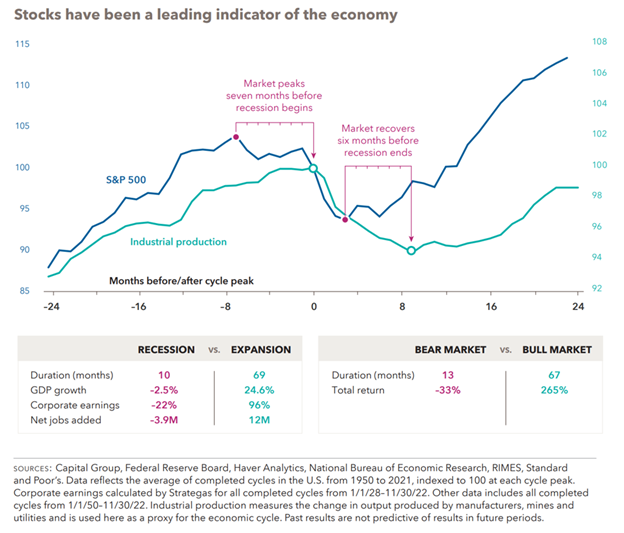 A small contingent of economists, including the Fed, believe the U.S. will avoid recession in 2023.  These forecasters believe that the Fed will be able to execute the fabled “soft landing” – bringing down inflation while averting recession.   They point to a strong job market – the unemployment rate still hovers near 50-year lows – as the ballast supporting consumers, who account for over two-thirds of U.S. economic activity.

Forecasting aside, it’s hard to argue that stocks and bonds aren’t more attractive today than last January at the market peak. This is why many money managers and banks have increased their forward-looking estimates of future returns.  Simply put, stocks, on average, are 20% cheaper than they were last year.  Yes, corporate earnings could decline should we enter a deeper recession than expected, but long-term investors have a better entry point today than they did at the turn of 2022.  The easy-money mode that accompanied the zero-interest rate era may be over, but we see that as a good thing.  Stock market leadership broadened in 2022, meaning the returns of a few large companies had less impact on the market than in recent years.  And bonds are more attractive than they have been in nearly 15 years.  Though the Fed may lift rates a bit more early this year, history tells us that future bond returns during times like this should be attractive. 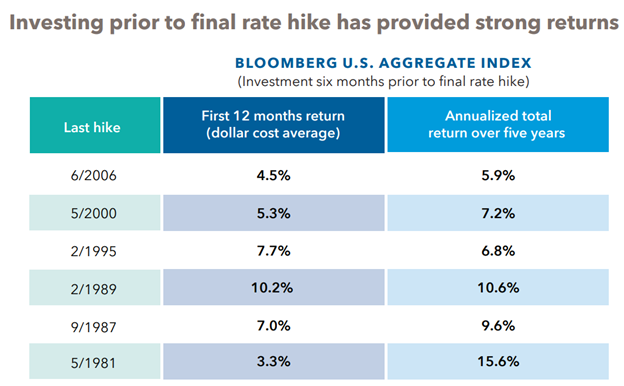 Now that interest rates are back near their historical averages, we read and hear that last year’s reckoning is simply a result of markets normalizing.  It’s a simple term, but it’s hard to define what “normal” means in the world of finance.   Many industry giants have even tried to redefine it or relabel it.  You may have heard of the “new normal,” which was born after the 2008 financial crisis, or the “old, old normal.”  In most cases, defining “normal” has meant forecasting the “natural” interest rate.  While a debate on what “normal” means in an economic sense could surely be interesting, we will spare you and offer the following insights to help with future expectations:

When we design financial plans (such as retirement savings or retirement income plans), we consider that the market does not rise uninterruptedly.  This is why we stress-test our plans to account for pullbacks, which we recognize come with the territory of investing.  While a sound financial plan can withstand periodic pullbacks in the market, it cannot overcome under-saving or overspending, so if you have been relying on lofty return assumptions, now is an excellent time to check in with us and schedule your annual review.  And if you are tempted to make radical changes to your investment strategy amid today’s uncertainty, consider what famed economist Gene Fama Jr. once said: “Your money is like a bar of soap.  The more you handle it, the less you’ll have.”

Guardian. CA Insurance License Number - 0D23495. Data and rates used were indicative of market conditions as of the date shown. Opinions, estimates, forecasts and statements of financial market trends are based on current market conditions and are subject to change without notice. References to specific securities, asset classes and financial markets are for illustrative purposes only and do not constitute a solicitation, offer, or recommendation to purchase or sell a security. Past performance is not a guarantee of future results. S&P 500 Index is a market index generally considered representative of the stock market as a whole. The index focuses on the large-cap segment of the U.S. equities market. Indices are unmanaged, and one cannot invest directly in an index. Past performance is not a guarantee of future results.