Things are tough out there.  The stock market is off to its worst start to a year since 1970.   Inflation is at a 40-year high.   Interest rates are rising.  A recession could be around the corner if one isn’t already here. Many speculative corners of the market have nearly imploded.   Even bonds, which generally provide protection during times like this, have experienced historic losses.

Investing seems like a fun game when everything is going up.   Chat rooms light up with the unemployed sharing their trade secrets, celebrities like Matt Damon dare us to “be brave”, and Uber rides to the airport come with free stock tips.  There’s a good chance that you can think back about a year ago and recall a time where a teenager (maybe your own) was talking about the market, crypto and NFT’s more than the Netflix’s hit Stranger Things.

Of course, anyone who had been in the market for a couple of decades – professional or not – knows that investing is not always fun.  It’s not supposed to be.  Bear markets and recessions come with the territory, require sound risk management, a level head, and a tested financial plan to achieve long term financial success.

Bear markets are defined as market declines of 20% of more.  The market (S&P 500) has crossed this line for the first time since Spring 2020 (COVID), though that bear market was short lived due to intervention from the Federal Reserve (“the Fed”).  Prior to that, the last bear market was in 2008.  Aside from a few small bumps in the road, financial markets (both stocks and bonds) have been very cooperative for the past 14 years.  Since World War II, on average, bear markets have taken 13 months to hit their low – we are about 6 months into this current bear market.  Of course, every bear market has been followed by a bull market (an increase of 20% or more) and the rewards of bull markets far outweigh the discomfort to get there as seen here. 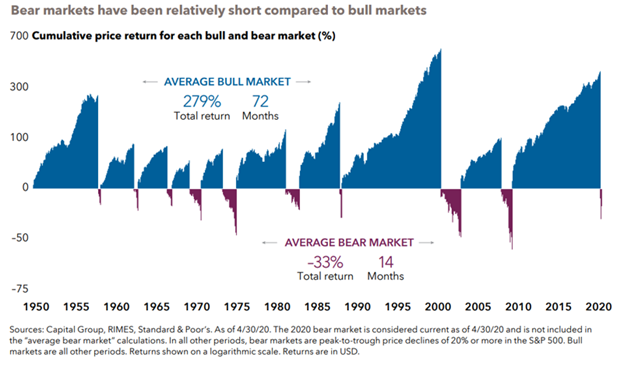 Though several factors have contributed to today’s downturn, recession signals top the list. Recessions are commonly defined as two consecutive quarters of negative GDP (Gross Domestic Product) growth, even if a national bureau must declare a recession for it to be official.  GDP fell by 1.6% in this year’s first quarter, and expectations are that the second quarter will be negative as well.  So, we very well may be in a recession today.   Common causes of recessions are rising interest rates (check!), inflation (check!) and rising commodity prices (check!).

Paradoxically, a mild recession, and falling stock prices, might be a good thing right now.  With inflation running at a 40-year high (9.1%) both consumers and businesses are feeling pain, and it doesn’t seem to be going away anytime soon, even if pressures are near a peak.  Today’s inflation was caused by the extraordinary support the Fed offered during the pandemic (lowering interest rates to zero and printing money) and the stimulus plans provided by Washington.  According to one study by Larry Summers (former Treasury Secretary and President of Harvard), during the worst months of the pandemic payrolls were down about $30 billion a month because people were unable to work.  Yet the variety of stimulus plans injected into the system in the form of enhanced unemployment benefits, forgivable loans, grants, and the like, summed up to $150 billion - $200 billion per month.  At first, those excess dollars went to savings as people and businesses hunkered down.  Now, that money is being spent and causing inflation.  Adding fuel to the flame are higher food and energy prices created by Russia’s invasion of Ukraine, and the ongoing supply chain issues.

To combat inflation those excess dollars must be removed from the economy and spending needs to slow down.  The Fed has already begun to remove dollars by lifting interest rates and through other measures (“quantitative tightening”) but has a long way to go.  A mild recession and lower stock prices would help to reduce spending because people won’t buy new cars if they are worried about their finances and businesses will pull back on spending and hiring.

Like bear markets, while never welcome, recessions are a natural part of the business cycle.  There have been 12 recessions since WWII, or about one every 6 years.  While recessions often overlap with bear markets, stocks are forward looking which is why historically stocks begin their rise months before the economy hits bottom.   As with the stock market, the economic good times far outweigh the bad times.  Since 1950 the average expansion has lasted 69 months coupled with GDP growth of 24.7% while the average recession has lasted 11 months along with negative GDP growth of 1.8%.

Given all the doom and gloom, people are rightly feeling pessimistic.  The Consumer Sentiment Index tracks how people feel about their own finances and how they feel about the prospects for the economy.  This past June, it fell to a 50+ year low.  It’s hard to believe, but people feel worse about our economy today than they did during the Financial Crisis, the tech bubble, the gas shortages of the 70’s, and the record setting inflation of the early 80’s (which was far worse than today).  Interestingly, markets have bounced back nicely when people have felt peak despair.   The following chart shows that markets produce better returns (+24.9% over 12 months) when people felt bad about the economy than when they felt good (+4.1%). 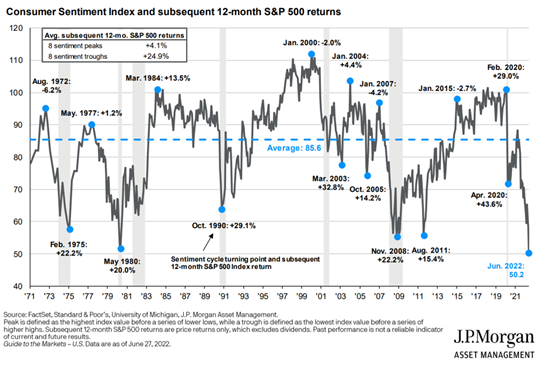 It's hard to think of a time where the economy has presented such conflicting signals.  Treasury Secretary Janet Yellen (who once led the Fed) recently admitted that she was wrong when about a year ago she said inflation would be a “small risk” and “not a problem”.  Federal Reserve Governor Christopher Waller recently opined “It’s really odd to think of an economy where you add 2.5 million workers and output goes down…I don’t know what kind of world does that”.  While the world’s top economists and market strategists are mostly confused about where we are headed, we at NFN are offering three approaches to dealing with today’s conditions.

TIME IT.   Sell everything, go to cash, wait for things to get worse and buy back lower.  Any good Financial Advisor would wince at this option, but it’s a thought that becomes tempting during down days.  Behavioral economists have found that the pain of losing is more powerful than the pleasure of gaining so sometimes emotions beat out rational thinking.   It has been said that the “Hall of Fame of market timers is an empty room” and that is likely because few people in history have been able to successfully time the market consistently.  While bull markets often last for years, a significant portion of the gains typically happen during the early months of a stock market rally.  And, missing just a few days of gains could have a devastating effect on returns even over long periods of time, as shown here.

TEST IT.   A sound financial plan is not created under the assumption that the market rises uninterrupted in perpetuity.   Rather, a good plan is stressed tested for bear markets, and has plans for it.  Those plans might come in the form of having conservative assets with guarantees, or income projections that don’t rely on overly optimistic assumptions.   Regardless, if you haven’t done so recently, now is a good time to revisit your financial plan.  Perhaps the smooth ride of the past decade was compensating for overspending.  Now could also be a good time to revisit your risk tolerance since it is not uncommon for people to overestimate their appetite for risk during good times.   However, be cautioned because at the same time many often become too risk adverse during bad times.  Either way, please feel free to schedule an appointment with us if you would like to “TEST IT”.

DO NOTHING.  According to two studies by behavioral economists, including Nobel Laureate Richard Thaler, the more people looked at their accounts, the lower their long-term returns were likely to be.  The economists found that investors who resisted the temptation to monitor the market earned higher rates of return over time than those who did, because they were less likely to veer off course.

Yogi Berra taught us that forecasting is hard, especially about the future.  Most of today’s economic conditions can be traced back to the extraordinary response to the Pandemic, a once in a century shock.  Fed Chair Jerome Powell recently said, “I think we understand better how little we understand about inflation”, which tells us that even the brightest minds don’t have crystal balls.  We at NFN also can’t rely on crystal balls so we lean on our vision and experience.  Markets reward those with patience, those who can withstand short term setbacks, and those with a tested plan.  If doing nothing doesn’t seem comforting today, please give us a call and let’s “test it” together.

Registered Representative and Financial Advisor of Park Avenue Securities LLC (PAS). Securities products and advisory services offered through PAS, member FINRA, SIPC. Financial Representative of The Guardian Life Insurance Company of America® (Guardian), New York, NY. PAS is a wholly owned subsidiary of Guardian. National Financial Network is not an affiliate or subsidiary of PAS or Guardian. CA Insurance License Number - 0D23495. Data and rates used were indicative of market conditions as of the date shown. Opinions, estimates, forecasts and statements of financial market trends are based on current market conditions and are subject to change without notice. References to specific securities, asset classes and financial markets are for illustrative purposes only and do not constitute a solicitation, offer, or recommendation to purchase or sell a security. Past performance is not a guarantee of future results. S&P 500 Index is a market index generally considered representative of the stock market as a whole. The index focuses on the large-cap segment of the U.S. equities market. Indices are unmanaged, and one cannot invest directly in an index. Past performance is not a guarantee of future results