Last week, your brother-in-law gave you another great stock tip.  He’s been trading a lot over the past few months and doing well.  Very well.  He is an architect but watches a lot of CNBC and combs social media constantly for great intel.  To be fair, the market is at an all-time high, so most investors have done well and have been eager to share their wisdom.  These days just about everyone is talking about the stock market and online trading.   And just like casino gamblers, most day traders like to talk more about their winners than losers.  Technology companies have led the way and so too have many companies that have yet to turn a profit at all.

Mark Twain once said, “History doesn’t repeat itself, but it often rhymes” and for those readers who recall the market boom of the mid to late 90’s, the chat with your brother-in-law could have just as easily occurred in 1998.

The similarities between today’s market and the market of the mid to late 90’s have caused many savvy investors to warn that we are now in a bubble of a similar nature.  Nobel Laureate and Yale Economist Robert Shiller defines a market bubble as “a situation in which news of price increases spurs investor enthusiasm, which spreads by psychological contagion from person to person, in the process of amplifying stories that might justify the price increases, and bringing in a larger and larger class of investors who despite doubts about the real value of an investment, are drawn to it partly by envy of others’ successes and partly through a gambler’s excitement.”

By that definition, it is hard to argue that there are not “micro bubbles” in some market corners, though they seem more likely to cause localized pain when compared with the broad-based drubbing of the 2000 – 2002 correction when the S&P fell by over 50% from peak to trough.   To say “this time is different” is the near equivalent of driving down the Belt Parkway at 50mph in Brooklyn during rush hour and expressing your happiness aloud about there being no traffic, so we will not do that because we all know how that ends.  But let’s take a look at why Barron’s recently penned an article entitled “This Just Might be the Best U.S. Economy Ever”.

“Pent up demand”.  You have probably heard the phrase which generally predicts a surge in spending during the second half of 2021. Household net worth is at an all-time high fueled by both rising stock and real estate prices while household debt servicing is at a 40+ year low.  Vaccines are being rapidly distributed (3 million a day, and 50% of Americans have now received at least one shot), interest rates, though rising, are still at historic lows and new businesses are being launched at a record pace (the top 4 months of business applications in US history have occurred since July 2020).  Jobs are coming back – over 900,000 were hired in March and the unemployment rate is down to a pandemic low of 6%.  Following their most recent meeting, the 11 members of the Federal Open Market Committee (“The Fed”) projected that the US economy will end up in a better place in 2023 than they thought it would prior to the pandemic.  The Fed predicts that the economy will grow at 6.5% in 2021, a level achieved only once in the last 50 years (1984). 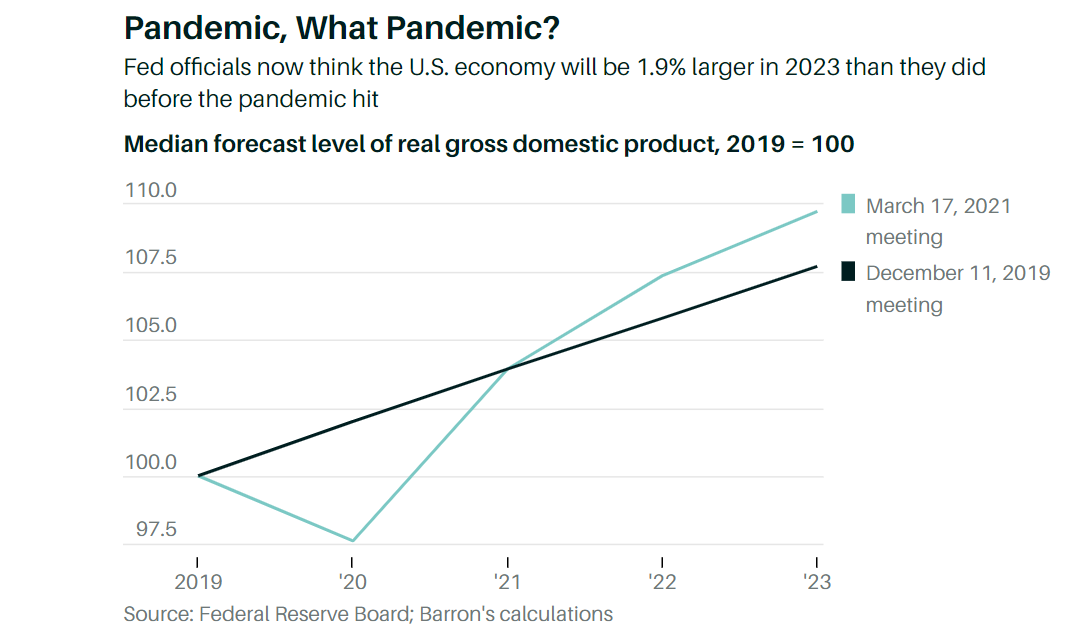 Of course, the Fed, and the U.S. government have been central to the recovery.  Short term interest rates (which are mostly controlled by the Fed) are forecast to remain near zero until at least 2023 while the Fed also continues to buy $120 billion of bonds a month.  Over the past 13 months the government has injected $5.6 trillion of aid into the economy, the most recent being the $1.9 trillion stimulus package passed last month.  Nearly one in every four dollars in circulation today has been printed since last March. 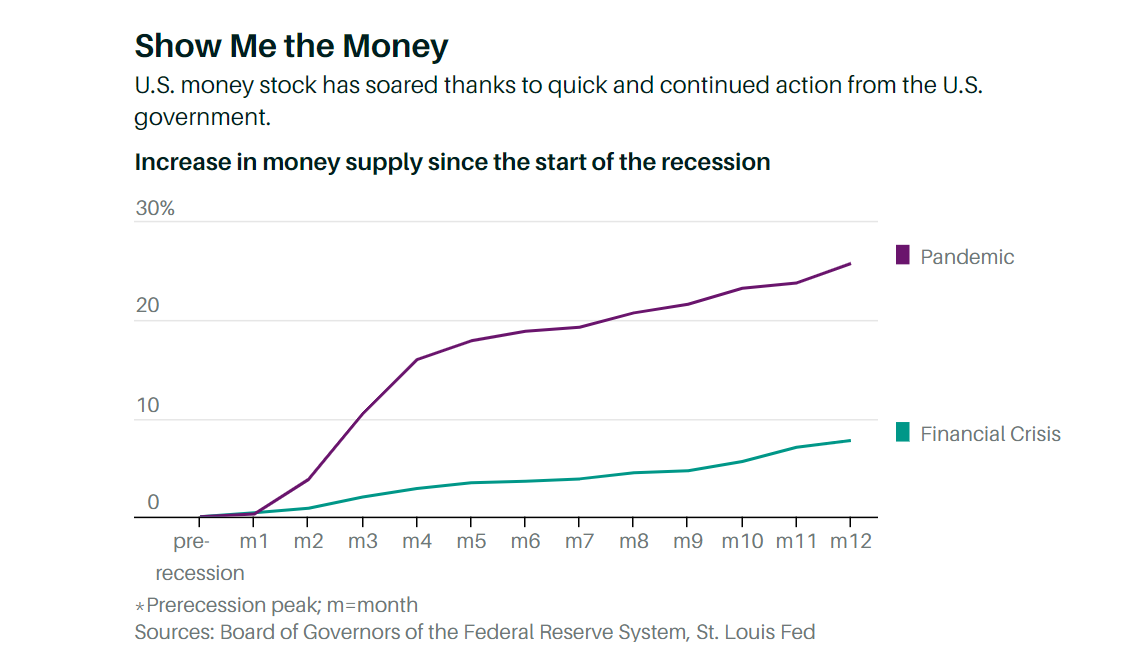 Unlike the last recession (2008-2009) the Fed’s actions have helped the economy to experience the “V shaped” recovery optimists were calling for last year.  Clearly the Fed used 2008-2009 as a learning experience, and the lessons have worked…so far. 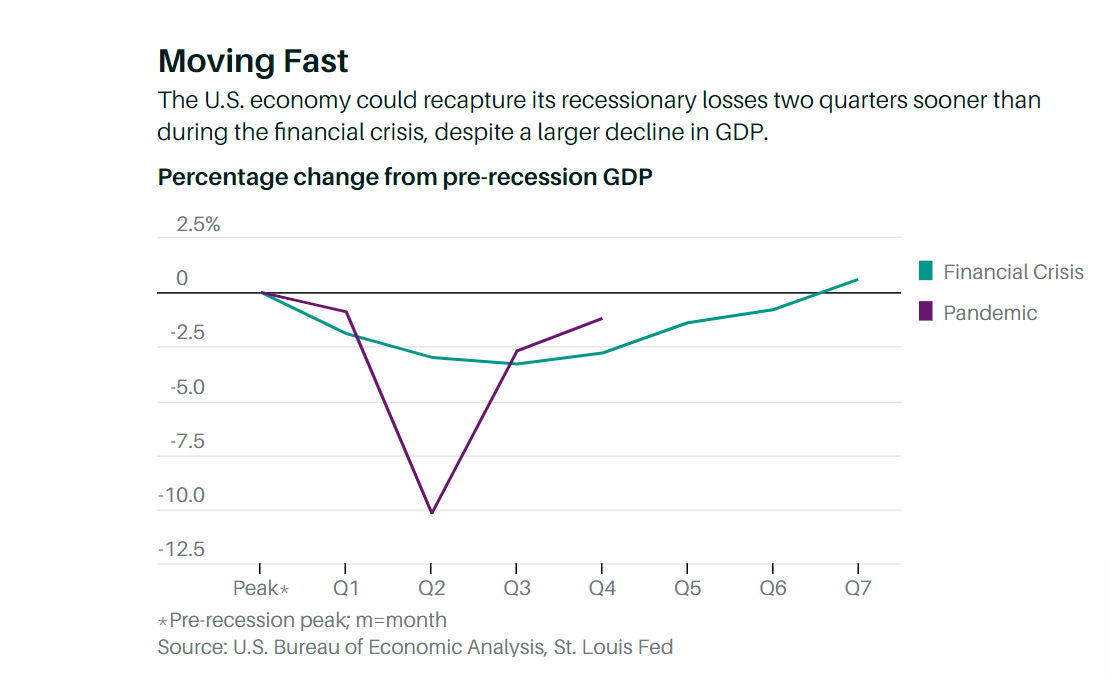 Though the economy seems to be headed in the right direction, the market does not necessarily have to follow suit, especially at today’s lofty valuations.  By most measures, the anticipated recovery is already “priced in” to the market which means further gains might be harder to come by, hence the oft heard cry of “bubble”.   Bubbles are tricky as they can only be identified in hindsight, can go on longer than you think, and even if one were to successfully identify a bubble, financial gains are not guaranteed.   In December 1996 former Fed Chairman Alan Greenspan famously warned of “irrational exuberance.”  It took nearly four years for the market to turn, a time when the market (the S&P 500) nearly doubled in value.  So, while Chairman Greenspan was correct in labeling the market a bubble, by coming too early his prediction provided yet another example of how simply staying invested would have been the better call.

While those in broadly diversified investments experienced losses in the aftermath of the 90’s bubble, they were not harmed nearly as much as those who had placed more concentrated bets on individual stocks and in the hottest sectors.  It took the NASDAQ (an index comprised mostly of technology stocks) nearly 15 years to fully recover its losses after peaking in March 2000.  Many household names and seemingly large “safe” companies suffered much worse fates – companies like Lucent, AOL and MCI WorldCom were among the most widely held at the time and suffered catastrophic losses.

Our investment and financial planning strategies do not assume that the market only rises, even if it does over long periods of time.   In fact, we understand that corrections and bear markets are normal.  A 20% decline usually occurs once every six years with the last one occurring about a year ago today.  We also understand that investors are far less likely to lose money over long periods of time using mutual funds and ETFs versus individual stocks.  And, where appropriate we incorporate investments with guarantees into our planning. Over the past 5 years 34% of individual stocks have lost money while less than 1% of stock funds experienced negative returns.

Already this year we have started to see the rotation as companies that were out of favor last year (like banks and energy companies) out pace the “stay at home” tech sector.  We can’t be sure if this trend will continue but we operate under the assumption that eventually asset prices gravitate towards their long-term averages.  So, sectors that suffer for extended periods of time often bounce back while those that have been red hot can’t continue at that pace forever.  The practice of portfolio rebalancing capitalizes on this knowledge.

By understanding that corrections are normal, rather than trying to implement strategies that attempt to predict the next bubble, we follow the advice of investment great Peter Lynch and know that “far more money has been lost by investors preparing for corrections, or trying to anticipate corrections, than in corrections themselves.”