It has been said that “far more money has been lost by investors preparing for corrections, or trying to anticipate corrections, than has been lost in corrections themselves”.  That sage advice would have come in handy at the turn of 2021.  Remember, this year started with a riot on Capitol Hill…during a global pandemic.  Following the insurrection, concerns about newly elected President Biden’s proposed tax hikes took center stage, only to later be overshadowed by inflation running at levels not seen since the early 80’s.

Any prognosticator attempting to read these tea leaves would have prepared for a likely correction this past year.  Of course, aside from some communities of traveling gypsies, few of us rely on tasseography (apparently there is a technical term for fortune telling using tea leaves).  Thankfully so, as despite all the obstacles presented in early 2021, the year ended with most major stock indexes at or near all-time highs.  Many of the forces that drove stocks to new highs, and those that presented challenges for bonds, will roll over into 2022, along with the ever present unknown.

Since the pandemic began, any attempt to understand financial markets or the economy must begin with The Federal Reserve (aka “the Fed”), led by Chairman Jerome Powell.  The Fed controls monetary policy which means they control the amount of money circulating in our economy.  They can add money to the system (termed “easing”) or reduce it (“tightening”).  Since the pandemic began, they have been adding money to the system – lots and lots of it.  In fact, since March 2020 the Fed has increased our money supply by 35%*.  This has been accomplished by transfer payments (stimulus checks, forgiven PPP loans, grants to municipalities, etc.) and by other banking mechanisms.

Over $6 trillion of new dollars are floating around that weren’t there in February 2020*.  Those dollars need a home.  Parking that money in a bank savings account or money market isn’t too attractive with yields at near zero (well, after inflation money is being lost in the bank).   So, the dollars look for greener pastures – like stocks, real estate, and even crypto currencies.  These new dollars are also being spent on things like home improvements and watches. Simply put, these new dollars have lifted all asset prices, from stocks to used cars.

The Fed did their job - they steered us away from a gargantuan economic iceberg.  Household net worth is at an all-time high, the job market is robust, and GDP (the broadest measure of economic output) is trending back at pre-pandemic levels**.  Monetary policy is known as a blunt tool and rightfully so.  Like a giant cruise ship, it does not turn on a dime.  Towards year-end the Fed began to reduce the amount of new dollars being printed (referred to as “tapering”) and signaled that interest rates will likely rise in 2022.

Those that study the Fed (Fed watchers) could interpret these signs - less money printing and rising interest rates - as less accommodative to stocks, and especially harmful to bonds.  But our money supply is still $6 trillion dollars larger than it was less than two years ago.  And, yes, interest rates are likely to rise in 2022, but the Fed’s target interest rate is zero today.  No kidding – it’s really zero.  Make no mistake, monetary policy will still be “easy” this year.  Though bond math would support the notion that rising interest rates result in falling bond prices (most major bond categories experienced modest losses in 2021) reality has been more nuanced.  Consider the last seven hiking periods where bonds declined in only two cases and averaged a nearly 4% gain across all seven periods.

Financial markets and the economy ended 2021 facing a force not seen in this magnitude since the early 80’s: inflation.  Inflation rates started the year at 1.4% and by Fall reached 6.8%, the highest reading since 1982***.  Early in the year, the Fed labeled higher inflation as “transitory” only to later remove that word when describing the phenomenon of rising prices.   The run up in prices has been caused by a near perfect storm of ingredients - growth in money supply and pent-up demand met COVID-restricted supply.  Economists expect supply chain issues to carry over into early 2022, so we should expect to live with inflation in the near term, even if most economists (and the Fed) expect it to subside.  As for the impact on financial markets, both stocks and bonds have performed admirably during most inflationary times. 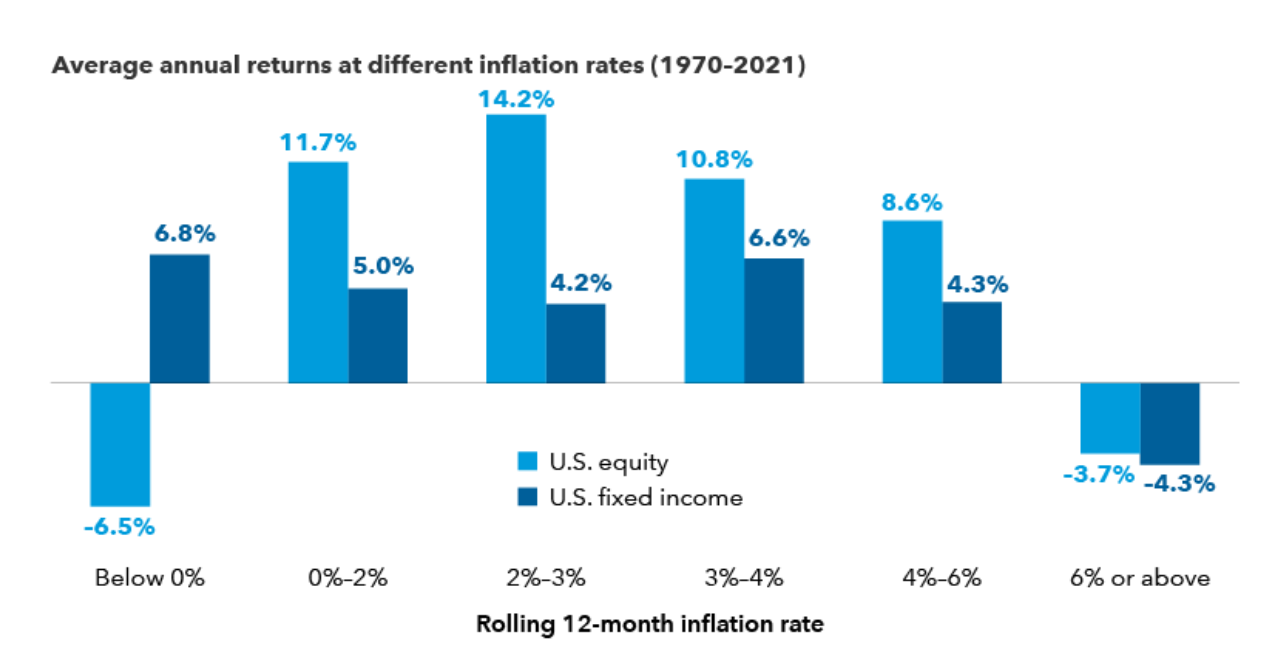 The mortal enemy of financial markets is not rising interest rates, inflation, or higher taxes.  Uncertainty is the market’s kryptonite.  Look no further back than Spring of 2020, the start of the pandemic.   The market, and its participants, reacted with panic.  The S&P 500 fell 34% in a few short weeks (only to quickly rebound in record time).  Clearly, and unfortunately, COVID is still with us.  But, unlike when it first struck, we have tools to fight it and it may be weakening, which is why markets are taking an emotionless view of Omicron. Paradoxically, at the close of 2021 both the stock market and the number of recorded positive COVID cases were both at all-time highs.

An astute medium speaks in vagaries and conjectures things that are nearly certain to happen.  Applying those principles, it’s safe to say that the stock market will show a loss at one point in 2022.  That’s happened every year since 1980.  But, despite average intra-year drops of 14.3% the market generated positive results 75% of the time. 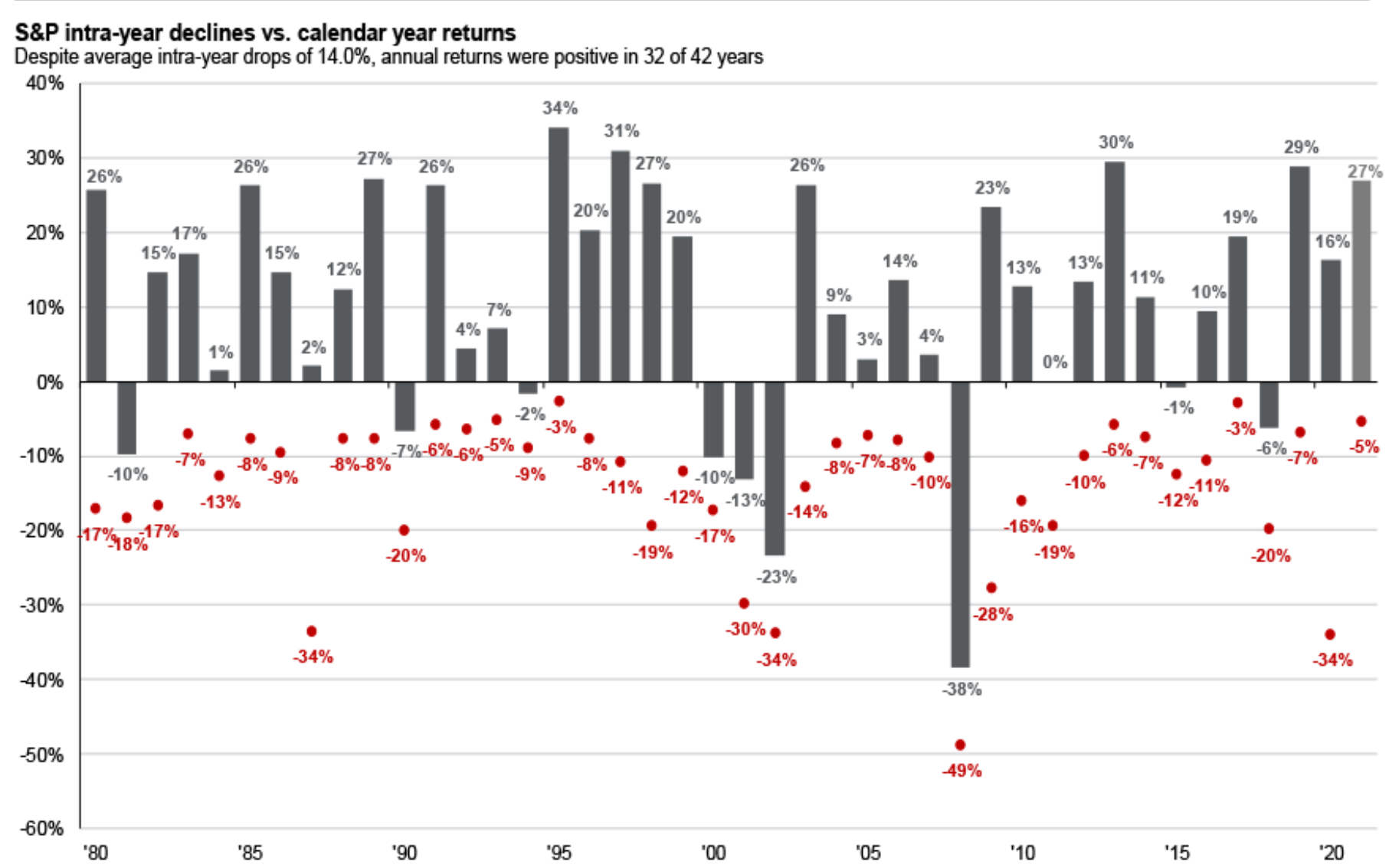 In addition to knowing that the market is likely to drop in any given year we also know that each year is unlikely to produce an average return.  Consider that over the past 94 years the S&P 500 has produced an average rate of return of approximately 10%, yet during that time frame there were only six years when it gained between 5% to 10%****.  Extremes are far more likely.

It was investing legend Peter Lynch of Fidelity fame who offered that “far more money has been lost by investors preparing for corrections, or trying to anticipate corrections, than has been lost in corrections themselves”.  Yes, the market has been cooperative for some time now, which makes reading those tea leaves especially tempting, but when it comes to helping our clients reach their financial goals, we’ll follow Mr. Lynch’s words of wisdom over any fortune teller’s.

Registered Representative and Financial Advisor of Park Avenue Securities LLC (PAS). Securities products and advisory services offered through PAS, member FINRA, SIPC. Financial Representative of The Guardian Life Insurance Company of America® (Guardian), New York, NY. PAS is a wholly owned subsidiary of Guardian. National Financial Network is not an affiliate or subsidiary of PAS or Guardian. CA Insurance License Number - 0D23495. Data and rates used were indicative of market conditions as of the date shown. Opinions, estimates, forecasts and statements of financial market trends are based on current market conditions and are subject to change without notice. References to specific securities, asset classes and financial markets are for illustrative purposes only and do not constitute a solicitation, offer, or recommendation to purchase or sell a security. Past performance is not a guarantee of future results. S&P 500 Index is a market index generally considered representative of the stock market as a whole. The index focuses on the large-cap segment of the U.S. equities market. Indices are unmanaged, and one cannot invest directly in an index. Past performance is not a guarantee of future results.