There’s no such thing as a free lunch.  You know the phrase and what it means.  Free hotel breakfasts, free checking, and free shipping all have associated embedded costs that we pay but don’t necessarily see.  Everything has a cost, even money.  The cost of money is the interest rate we pay to borrow it, and for the better part of the last 12 years, that interest rate has been near zero.  And while free money seems like a dream come true, it too has costs, and this year we are paying the price.

To understand where we are today, it is instructive to look back to the financial crisis of 2008 and the role of the Federal Reserve (The Fed).  The Fed is a key figure in determining the cost of money (in addition to controlling the money supply) by setting the Federal Funds Rate.  Low interest rates make borrowing cheaper which in turn keeps down mortgage payments, encourages businesses to borrow to build, invest and hire, and generally stimulates spending.  Low rates also make safer assets, like bonds, less attractive.  For much of the past decade, yields on bonds were at all-time lows, encouraging people to eschew these safer investments in search of a higher return in riskier assets like stocks, crypto, NFTs, and venture capital funds.

The cost of free money has finally appeared in the form of inflation, which may have peaked this summer, but remains near 40-year highs.  To reign in rising prices, the Fed has begun a series of rapid and outsized interest rate hikes and expects to continue increasing rates through year-end.  Following is a look at the Federal Funds Rate since 2000, including future projections. 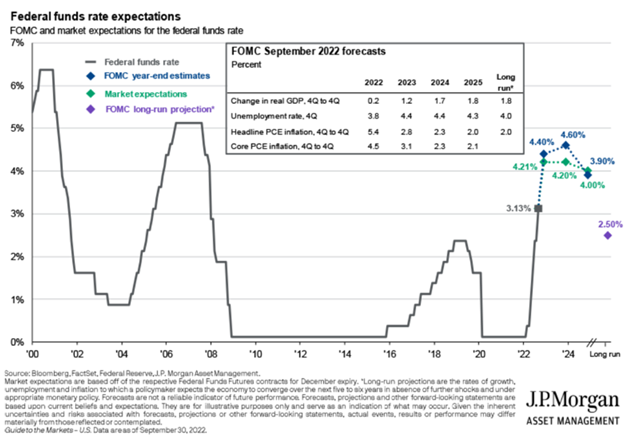 This rapid increase in interest rates has driven stocks into bear market territory (the S&P 500 is down over 20% in 2022) and has bonds on pace for their worst year ever.  Much of these declines can be attributed to the aftermath of moving markets and our economy away from free money.  Though the Fed Funds rate has been rising at a historic pace, it is still over 1% lower than its average going back to 1954.  Should the Fed increase rates as projected, by year-end rates should match their historical average.  Much has recently been written about the spike in mortgage rates, which now hover near 6.5% for a 30-year fixed rate option, compared with 2.9% just a year ago.   Yet even today’s rates look attractive when compared their historical average over the past 50 years of 7.8%.

Simply put, the last 12 years were spent trying to recover from the Financial Crises and later the Global Pandemic.  Extraordinary measures were taken, and those measures could not remain present forever.   But the withdrawal so far has been painful.

At a recent press conference, Federal Reserve Chairman Jerome Powell said, “Price stability is the responsibility of the Federal Reserve and serves as the bedrock of our economy.  Without price stability, the economy does not work for anyone.”  He went on to say that the “unfortunate costs of reducing inflation will bring some pain to households and businesses.”  The interpretation here is that Chairman Powell likely sees the benefits of slower economic growth, and maybe even a mild recession, to exceed the costs, as such conditions would likely help to stamp out inflation.  Like most economists, chairman Powell recognizes that recessions are a normal part of the business cycle, are relatively short-lived, and are followed by expansions, as illustrated below.

Not surprisingly, recessions and bear markets (declines of 20% or more) have often overlapped.  And while the two often accompany one another, stocks are usually six to seven months ahead of the economy since stocks are “forward looking”.   That is, stocks will generally fall before a recession starts and recover while the economy is still in recession.  For instance, in studying the last nine recessions, the market began its recovery in all but one before the recession was over.  The following graph illustrates this relationship well by showing how stocks begin their ascent before the economy does (here, industrial production is used to represent the economy).

While never welcome, any seasoned investor knows that bear markets are typical when investing in stocks.  On average, the S&P 500 experiences a bear market once every six years.  So, given that investing spans a lifetime for most people, dealing with bear markets is ordinary and factored into a sound financial plan.  On the other hand, bonds usually provide ballast during volatile times for stocks, but for the first time in over 50 years stocks and bonds have fallen in near lockstep, in unison.  Falling bond prices, an index that tracks bond prices is down nearly 15% this year, have been caused by the rapid increase in interest rates.  Because today’s bonds are being issued with the highest interest rates in over a decade, those bonds that have been issued over the past several years at lower rates are less attractive and, therefore, worth less.

Before the Fed lowered interest rates to near zero in 2008, investors often purchased bonds for both protection of principal (if the bond issuer does not declare bankruptcy, the bondholder is promised their principal back at maturity) and income.  However, since the Financial Crisis, the income awarded to bond purchasers was paltry at best.  Consider 1-year Treasury Bills, which less than one year ago were yielding a measly .09%.   Today the rate is near 4%.  Bonds, which are referred to as fixed income products, are finally generating income again.  While existing bondholders have been hurt short-term, once those bonds come due, the proceeds can be invested at higher rates.

Inflation readings and the Fed’s actions and future intentions will undoubtedly play a significant role in the market’s direction for the balance of the year as will corporate earnings.  While the connection between the goings on in Washington D.C. and the market’s direction are loosely connected at best, the midterm elections offer investors a new worry point, if nothing else.  Yet, if history is any guide, midterm elections have marked a positive turning point for the market, regardless of which political party gained power.  Consider that since 1942 the market has generated a positive return 12 months after every midterm election.  And, in looking one year out after midterms, the S&P 500 was up 15.1% compared with 7.1% in all other years. 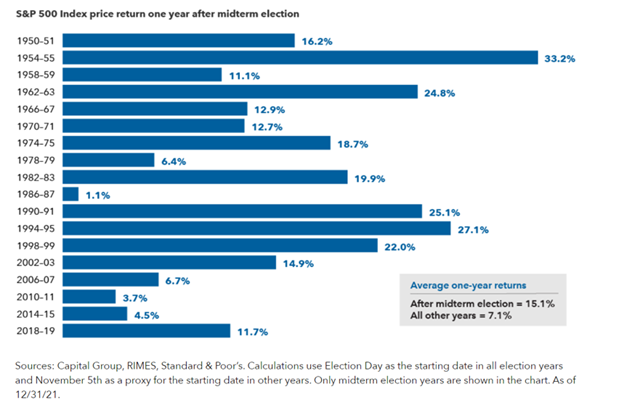 If current market conditions leave you a bit uneasy, we encourage you to contact us to revisit your financial plan.  A sound plan is not built under the assumption that markets will rise in a straight line in perpetuity.  While we can’t predict the exact timing of unexpected market events, we expect that unexpected shocks will happen several times throughout an investing lifetime.  It has been said that “History doesn’t repeat itself, but it often rhymes”.  While there are certainly unique events occurring in today’s markets, we know that every bear market has been followed by a new bull market.

Guardian. CA Insurance License Number - 0D23495. Data and rates used were indicative of market conditions as of the date shown. Opinions, estimates, forecasts and statements of financial market trends are based on current market conditions and are subject to change without notice. References to specific securities, asset classes and financial markets are for illustrative purposes only and do not constitute a solicitation, offer, or recommendation to purchase or sell a security. Past performance is not a guarantee of future results. S&P 500 Index is a market index generally considered representative of the stock market as a whole. The index focuses on the large-cap segment of the U.S. equities market. Indices are unmanaged, and one cannot invest directly in an index. Past performance is not a guarantee of future results.